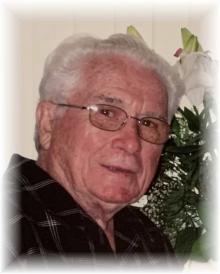 It is with deep sadness that we announce the passing of our husband, father and grandfather, Norman Mann.
Norman was predeceased by his parents, Valentine and Mary, as well as his son Brian Mann.
He is survived by his loving wife of 72 years, Terry and his children, Brenda Galvin (Gerry), Cathy Mann (Bob), Brock Mann (Pat) and grandchildren, Kelly Kormylo (Mick), Emily, Madeline and Jack. Norman is also survived by his brother Ron (Doris) and nephew Darren (Cheryl) Courtney, Brandyn and Breanne.
Norman was born December 8, 1927 in Winnipeg. He grew up in the north end where he was known around the neighborhood as "Red" in reference to his bright red hair. It was there that he met the love of his life Terry, whom he married July 3, 1948.
Norm was employed by the Manitoba Sausage Company now called Winnipeg Old Country Sausage for many years before moving on to sales at Old Dutch Foods, where he stayed for 23 years. When he retired at age 60, he gave his attention to his family, especially his grandchildren. He attended every soccer, hockey and basketball game that he could.
Norm loved fishing and was a founding member of the Flying Fishermen Club (Gammon River), as well as one of the original members of Heather Game and Fish.
Norm was a consummate salesman, charming and funny. He loved to talk, and his feisty nature and irrepressible sense of humour were a constant source of smiles and chuckles to everyone who met him. He had a great love for people and will be remembered and missed by all.
Norman was cremated and a private memorial service will be held at a later date.
During his last few years, Norm resided at Concordia Place Personal Care Home. Our family will be forever grateful to the staff for all the love and kindness that they showed Norm especially during these difficult COVID times.
Dad you may have been small in stature, but to us you were larger than life and we will miss you dearly.