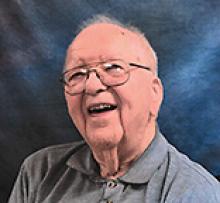 Dennis passed away peacefully on November 3, 2020.
Born May 22, 1933 to Thomas and Olive Faulkner, in the Manitou area. The family moved to Winnipeg when he was still a youngster, and he spent the rest of his years there, where he touched many lives with his humour and wit.
He is survived by his loving wife of 62 years, Elva (Bowman), son Ken (Cindy), daughter-in-law Cynthia, three grandchildren and two great-grandchildren. He was predeceased by his son Wayne, his parents, brother Richard (Barbara) and sister Alice (Dave Ross).
He spent his high school years playing football for the Daniel MacIntyre Maroons championship teams. After high school he signed a tryout contract with his beloved Blue Bombers. He then coached young football players. He spent over 40 years as a league executive with the MMJHL, a number of those years with the St. Boniface Riels. He is a lifetime member of the MMJHL. As well, he curled for years (Electrical League) and golfed with the St. Bartholomew Church Group and the Manitoba Seniors Golf. Many young children knew him as Santa Claus.
The family asks that in lieu of flowers, donations may be made to Meadowood Manor or a charity of choice.