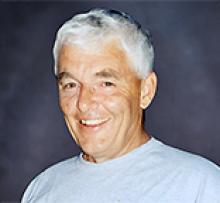 John was born in Winnipeg on October 30, 1942. He was an only child; the pride and joy of Gladys (Smith) and Frank Stoddart. Like most boys growing up in the forties and fifties, he was a fan of Roy Rogers, playing baseball, comics and trading cards. But John was no angel: he once lit a grassy field on fire. This was not taken well by Frank, who was with the Fire Department at the time.
John graduated from the University of Manitoba in 1965 with a degree in civil engineering, but not before he and three friends hitch-hiked to Newfoundland, were hired to watch as lookouts on a steam ship in exchange for free passage across the Atlantic, and traipsed around Europe for several months.
John and Leslie started dating while they were both students at University of Manitoba, and were married shortly after their graduation in 1965. John was blessed with four brothers-in-law, Blair and Mary Fenton as his new father and mother-in-law, and a beautiful woman to share his life with.
The young couple moved many times in their early years, once living in a basement suite that featured one medium-sized rat, and another time in a Quebecois heritage home. After stints in Montreal, Edmonton, Hamilton and Winnipeg, the Stoddarts settled in Calgary's Lake Bonavista community with their two daughters, Katherine Leslie and Kirsten Jane in 1973. There, they had three more children, Scott Francis, Megan Mary Ann and Joshua John.
John was an engineer, but he was also a developer, an entrepreneur, a visionary and a business consultant for other dreamers. After moving to Calgary with ATCO, John was fortunate to make many lifelong friends in the Calgary community through various endeavours. John was proud of his involvement with The Fountains of Mission, and the development of Marda Loop Village. He was a strong supporter of community initiatives and small businesses. He loved a challenge, and would never shy away from an opportunity just because he didn't have any experience in the field. That's why he found himself behind the noodle-making machine when he opened Oodles Fresh Pasta Restaurant. In 2011 he, with Megan and other family members, opened Global Pet Foods in Marda Loop (a thriving specialty pet food and supply store continues to run) and loved to dress up as Santa for the annual Pet Photos with Santa charity event.
John was a lifelong member of the United Church, especially active with Living Spirit United Church in the years before his illness, both in administration and with initiatives to support refugees in Canada. He was also a strong supporter of Inn From the Cold and COSA.
Although John worked hard and loved what he did, he also cherished his sports and hobbies. He was a great Scrabble-player and a Sudoku whiz, an avid reader and a Karaoke-lover. He was a die-hard Calgary Flames supporter, a superb squash player, a Theatre Calgary fan and a great golfer. He could water-ski, build an addition on the house, bang a tune out on the piano, make delicious crepe suzettes, fix pretty much anything, talk like Donald Duck and wiggle his ears on command. But sometimes John just liked to lie on a towel in the white sand at Sandy Bay (Victoria Beach) Manitoba "working on his tan."
What truly made John special was that he lived and breathed "family." Yes, he juggled many business ventures, sports, hobbies and renovation projects, but if anyone needed a shoulder to cry on, some wise advice or a sushi dinner together, he was there. He was a devoted husband, son, father, father-in-law, brother-in-law, uncle, papa and friend. His generosity, optimism, adventurous spirit and sense of humour inspired the many, many people who knew and loved him.
John will be lovingly remembered by Leslie; his children, Katherine (Bob) Fawcett, Kirsten (Pat) Quealey, Scott (Kathy Melton) Stoddart, Megan Stoddart and Josh (Amelia) Stoddart. His memory will also be cherished by his dozen grandchildren, Jack, Hanna, Maya, Clare, Tom, Lilah, Tybalt, Max, Ruthie, Charlie, Frankie and Alice; and by four brothers-in-law, Richard, Robert, Mitchell and Jonathon Fenton; as well as numerous cousins, nieces and nephews and dear friends across Canada and around the world.
A memorial service will be held when it is safe to do so. Condolences, memories and photos may be shared and viewed on John's obituary at www.McInnisandHolloway.com.
In lieu of flowers, the family is requesting that donations be made directly to: