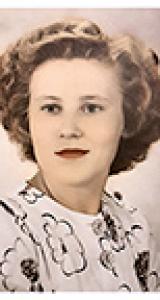 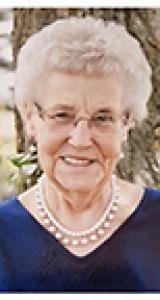 After a lengthy illness, Mom passed away peacefully on November 4, 2020, at Oakview Place, at the age of 93.
Remaining to forever cherish Kay's memory are her children, Bob (Margaret), Eric (Doreen), Jack (Barb), Joanne Braun (Eric) and Donna; grandchildren, Michelle (Normand), Aron, Bryant (Heather), Laura (Jason), Dylan, Jesse, Brent, Kevin (Kim), Jessica, Simone, Rebecca (Jordan) and Constance; and great-grandchildren, Emily, Paige, Sophie, Benjamyn, Michael, Britney, Riley, Dawson, Liam and Evangeline.
She is survived by sister Meta Balko, sisters-in-law, Lydia Voth, Agatha Dyck, Margaret Funk, Hedy Thiessen, and brother-in-law Peter Becker.
She was predeceased by her husband John in 2008, father and mother Johannes and Olga Hoffman, father-in-law and mother-in-law Aron and Margareta (nee Driedger) Thiessen, as well as two sisters-in-law and six brothers-in-law.
Mom was born in Tirpitz, Germany and immigrated to Canada when she was six months old.
She was baptized in 1927 in the Lutheran faith, and joined Schoenfelder Mennonite Church in 1950. After moving to Winnipeg, they joined First Mennonite Church. Her faith in the Lord was unwavering.
Mom married John Thiessen on June 11, 1949. For over 59 years they did everything together like travelling all over the United States and coast to coast, fishing, camping, and bowling just to name a few. In the early days they farmed in the Baie St. Paul area until they moved to Winnipeg in 1979.
Mom's first job was a bellhop at the Manitoba Club, a year later she worked as a secretary at Manitoba Bridge and Iron Works. When Mom started to have children, she quit working and became a full-time homemaker. Her heart was so large Mom cared for 13 foster children from 1960 to 1970. She said "It was easy to love the children but oh so hard to part." They decided to adopt three children.
After the loss of use of her hands she was unable to do the things she loved most like baking, knitting, crocheting, gardening, writing in her journal, and playing cards on Friday nights. Even though she suffered, she was always completely selfless and worried about everyone else.
The family wishes to thank the 3rd floor staff at the Grace Hospital, Lori and the team at Lodge 2 at Deer Lodge Hospital, and Oakview Place.
A private service will be held with the family on November 12, 2020 at Chapel Lawn.
In lieu of flowers, donations may be made in honour of Kay Thiessen to Canadian Organization for Rare Disorders, 151 Bloor Street West, Suite 600, Toronto, ON M5S 1S4 or Oakview Extendicare, 2395 Ness Ave., Winnipeg, MB R3J 1A5.