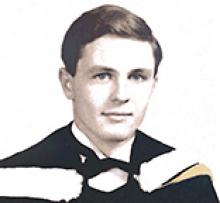 Thursday, November 5, 2020, Douglas Gordon MacDonell, was served an iced cold beer by his true love Lynn, for the last time. Theirs was a love story that spanned many years and produced even more children. Doug lived for, and is survived by those children, Doug (Yorka), Jeff, Jamie (Deniz), Greg, Monique, Matthew (Zoe) and Kristin (Kevin). The love he had for his children was surpassed only by the love he had for his grandchildren, Abigail, Sophie, Grace, Dylan, Skyler, Emily and Sage. Doug is also survived by his sisters, Joan and Lynne (Jean). Doug was predeceased by his granddaughter, Danielle.
Doug left an impression on everyone he met. Whether it was because they were still trying to process the mildly inappropriate joke that he just told, or because they were blown away by the kindness and intelligence they were just witness to. His character and presence stayed with him until the end. After a conversation with Doug, where he tried to convince him that he was ok to go home, Doug's doctor said, "Doug sure is an engaging and intelligent man". Turns out Doug lost that debate. If he could, I am sure Doug would tell you that the doctor was wrong.
Doug loved family, classical music, and sports (but not always in that order if there was a bomber game on). He was the Manitoba Junior Tennis Champion and won many Badminton Championships in his teens and early twenties . . . the ones he didn't win, were surely the other guy's fault?? He had a beautiful voice that he shared with many, through his years as a church soloist and choir member at St. Andrews United Church and most recently, with the Joie De Vivre Singers.
After skipping most of his classes to play Bridge, Doug graduated from the University of Manitoba with a B.Sc. (Honours). He went on to work as paint chemist for Northern Paint, before switching career paths and entering the financial world. Doug spent his decades-long career as a Certified Financial Planner dedicated to the success of others. Becoming a client of Doug's meant becoming a part of his extended family. You were greeted at the door to his office with a smile and a hug from someone who genuinely cared about you. Doug's exceptional intellect and planning skills meant that your financial future was in the best possible hands. This simple fact was proven time and again by the families who trusted Doug for generations, as clients referred their children to him, and then those children referred their children. Doug will be remembered for his boundless generosity, good cheer, and sense of humour. Working with Doug meant that everyday started with a joke, or a limerick, or a story about his beloved grandchildren. If you were really lucky, you got all three, and you knew it was going to be a great day.
Of all the things that Doug had accomplished in his life, he was most proud of being a Papa to his grandchildren. Nothing brought him greater joy than spending time with his grandkids. Whether it was simply hearing about their day at school or ordering some french fries and popcorn from the canteen and watching them play ringette, his grandkids were his world.
He was a truly special and remarkable man and will be dearly missed by many.
In lieu of flowers, the family asks that you make a donation to CancerCare Manitoba, or KidSport Canada.
Due to Covid, no Celebration of Life will take place, instead, please pour a Scotch, and raise a glass to an amazing man.

Friends and relatives are encouraged to share in a photo-tribute, stories, and condolences for the family by visiting Doug's memorial page at IntegrityFuneralPlanning.com