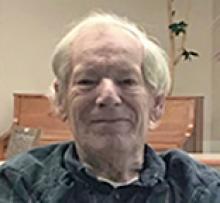 It is with great sadness that the family of Peter Jansen announce his peaceful passing at Maples Long Term Care Home on Monday, November 2, 2020, at the age of 83.
Peter was born in The Hague, Netherlands and came to Canada with his family following the end of the Second World War. He became a professional photographer and was rarely seen without his camera and trusty camera bag. He worked his entire career at Winnipeg Photo and Lifetouch. In addition, Peter also had his own freelance photography business and took great pride in his work photographing weddings, first communions, and other special moments in people's lives. He was also quite proud of his work taking pictures for the Winnipeg Jets and Winnipeg Blue Bombers during the 1980s.
Peter was predeceased by his wife Patricia; and parents, Johannes and Joanna Jansen. He will be lovingly missed by his son Barry (Alison) and daughter Tina. Peter will also be fondly remembered by his three grandchildren, Alexandra, Allyssa, and Dylan (Amy); as well as four great-grandchildren, Nova, Myla, Gideon, and Josiah. He also leaves behind his sisters, Corrie (Frank) and Elizabeth (Andre); and his brothers, John (Toos), Frank (Wendy), and Bill (Terry).
We will be forever grateful for the care he received at Maples Long Term Care Home. He was treated with incredible compassion, kindness, and respect by the staff and we wish to express our heartfelt thanks and appreciation to those involved with his care.
Due to the current COVID situation, a private graveside service was held at All Saints Cemetery where Peter was laid to rest beside his loving wife.
In lieu of flowers, donations can be made in Peter's memory to the Alzheimer Society of Manitoba.