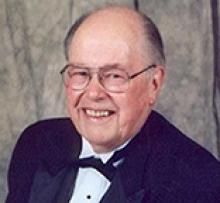 Vernon Douglas Burrows died peacefully in hospital, on November 8, 2020.
He was born in 1930, in St. Boniface, Manitoba to Ernest George Victor Burrows and Edith Lillian Cartwright. He married Elizabeth Ann (Betty) Machacek (deceased 2012) in 1954. He leaves behind two daughters; Diane (Gregory) and Janet; his sister, Ruth Boyes and her children, Sandra, Fraser, David and Carolyn and their families; and Robert Machacek (Josie) and their sons, Dan and Graham and their families, and late sister-in-law, Pat Machacek.
Vern dearly cared for and loved each and every member of his family through deeds and words. We in turn were very proud of our creative and inspiring "Dr. Oat".
Vern graduated from the University of Manitoba (BSA and MSc) and the California Institute of Technology in Pasadena, California (PhD, 1958). He and Betty moved to Ottawa, Canada to begin his life-long vocation of agricultural research. Vern had a 40 year career as a research scientist at Ottawa's Experimental Farm, breeding 27 oat varieties (notably AC Gehl) and publishing 100 research papers including four book chapters. He was known for running around his oat plots in Ottawa and California's Imperial Valley with his field notes, Tilley hat and sunscreen. He celebrated innovation of any kind, would promote the merits of oats to anyone who would listen, and was a lunchtime mainstay of the old Carling Building's "eclectic table".
After retirement, Vern became a research scientist emeritus at Agriculture and Agri-Food Canada. He volunteered his vast expertise for another 19 years to improve oat crop yield and quality in China and Canada. He and Betty travelled to China 12 times, to build scientific connections and friendships with its oat research community. They also welcomed oat scientists from China into their home. Vern received scientific honours from China - the most unique is a large bronze statue of him, holding a sheaf of oats, erected at the Baicheng Academy of Agricultural Science in Jilin Province. Vern also helped the Professional Advisory Board of the Canadian Celiac Association to develop a protocol for producing oats that are edible by many persons with celiac disease. He was an inspiration, mentor, and friend to many, both locally and internationally, to the end of his life.
In December 2001, Vern was thrilled to become a member (CM) of the Order of Canada, and in February 2019, he was promoted within the order to become an officer (OC). He received many Canadian scientific awards, as well as the Queen's silver and gold jubilee medals.
In 2017, at age 87, Vern was diagnosed with progressive bulbar palsy, a type of ALS. The family recognizes the immense support from the ALS Society of Canada's equipment loan program, and the Ottawa Hospital's ALS Clinic and Civic Campus.
The family also thanks Stirling Park Retirement Residence and Embassy West Senior Living in Ottawa for their excellent care of Dr. Burrows.
Interment will be private.
In lieu of flowers, please consider donating to the ALS Society of Canada, the Canadian Celiac Association or the charity of your choice.