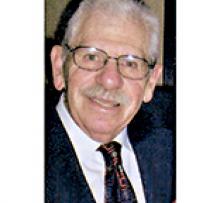 Sydney Cohan passed away peacefully at the Misericordia Hospital on November 7, 2020, after a short but tough battle with a rare type of Lymphoma.
Born to Rae and Philip Cohan on March 7, 1931, Syd's early years were spent in Dauphin and Russell, Manitoba. He attended the University of Manitoba Law School, was called to the Bar in 1957 and joined Walsh Micay and Company. Subsequently he was associated with Ed Kimelman and Bob Kopstein, after which he practised as a sole practitioner till age 84. Syd also served as a part-time Provincial Court Judge for 20 years, during which time he presided in Winnipeg and throughout the Province. He enjoyed his visits to northern fly-in communities, which included walking away from one crash landing.
Syd had an active interest in amateur sport as board member, official and competition judge, supporting his daughters and other youth in their amateur swim careers. He was a Past President of the Manitoba Section of the Canadian Amateur Swimming Association and has also served on the National Board. He was Chairman of the Manitoba Council of Fitness and Amateur Sport and was a board member of Sport Manitoba. Syd also represented amateur sport as a Director of the Manitoba Lotteries Distributors Inc. when amateur sport was a funding recipient.
Syd's greatest involvement (and love) has been with golf. He was past President of the Manitoba Golf Association and was a founding member of the Manitoba Golf Hall of Fame and Museum Inc. He also worked as a Rules Official at amateur golf tournaments for years. He had the honour of being the non-playing captain of the Manitoba Willingdon Cup team which won the Canadian Amateur championship at Crow Bush Cove, P.E.I. Syd played some 150 courses during his golfing life. He was a longtime member of Glendale Golf and Country Club, and has the proud record of four Holes in One! Another love of Syd's was music, especially jazz; he had a natural ability and ear to play almost any instrument. The game of bridge was his final love and after retirement he spent many hours at the bridge table.
Syd was a caring man who valued family and community and he knew how to bring a smile to people's faces.
Syd is survived by his wife of 40 years, Anne M., and his daughter Cheryl (Noah); stepsons, Greg and Neil (Collette); and grandchildren, Holly, Michelle, Scott, Leah, Micah and Brina (Bee). He also leaves to mourn Leanna, a special young lady residing at St. Amant Health and Transition Services. No one could make her laugh as he did! He is also survived by his former wife Anne and a brother Jack. He was predeceased by his daughter Maureen and by his stepson Kelly.
Syd was a member of Congregation Etz Chayim for many years and was laid to rest at the Rosh Pina Memorial Park.
In memory of Syd, gifts may be made to the Cohan Family Memorial Fund at The Winnipeg Foundation, 1350 One Lombard Place, Winnipeg, MB R3B 0X3, phone 204-944-9474, www.wpgfdn.org or to the St. Amant Foundation at 440 River Rd., Winnipeg.