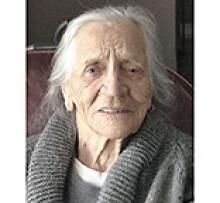 Peacefully, on November 7, 2020, Anna Dubanski passed away at home surrounded by family, at the age 106.
She is survived by her granddaughters, Ola Tutaj, Mary Tutaj, and Margaret Jerrett (Michael) and great-grandchildren, Mathew and Megan of Mississauga, ON. She was predeceased by her father, Marcin (1949), mother, Katarzyna (1954), husband, Adolph Dubanski (1979), siblings, Genia, Jozef, and Jasiu during the Second World War and Mary (1993), and son-in-law, Miroslaw Tutaj (2009) and daughter, Helen Tutaj (2013).
Anna was one of five children born to Marcin and Katarzyna Tesarowski in Muszkatowka, Poland. During her lifetime, Anna lived through and endured many difficult times. She survived the loss of her siblings, the Great Depression and two world wars. In 1941, she was sent to a labour camp in Obernwerzbog, Germany and in 1943, gave birth to her daughter Helen. After the Second World War ended, Anna and her daughter returned to Poland in 1945. Under the sponsorship of her sister, Mary, Anna and Helen immigrated to Winnipeg, Canada in 1959 on the M/S Batory. In 1965, Anna met and married Adolf Dubanski. She was employed at the Patricia Hotel, Sharon Home, and at the Grace Hospital until her retirement in 1979.
Anna was a humble person who did not require much. She was a devout Catholic and filled her spare time crocheting, knitting sweaters and afgans for her family. She loved gardening and tending to her flowers. In 2003, at the tender age of 89, Anna and her dog Dixie were coaxed into moving in with family where she was cared for by her daughter, Helen until her untimely passing, and then by her granddaughters, Ola and Mary. Each morning she would take her seat by the front window and watch the trees and flowers bloom. You would hear her exclaim, "ale fajnie" when you brought her a summer flower basket to inspect, and in the winter months as snow fell you would hear her shout, "ale snieg spadl". She had a love for nature and animals and would pass the day watching "Animal Planet".
The family extends virtual hugs to all the home care workers Anna crossed paths with over the years. Your help allowed us to keep her in the comfort of her own home until the very end. We will be forever grateful.
Mass of Christian Burial was held Friday, November 13, 2020 at 10:00 am at Holy Ghost Roman Catholic Church.
In lieu of flowers, donations can be made to Holy Ghost Church or a charity of your choice.