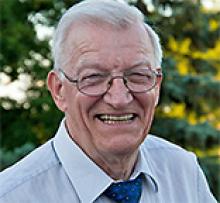 Peacefully on November 4, 2020, William (Bill) Hancox passed away at the Grace Hospital.
Through this difficult time in the world with Covid-19, we can't say he was surrounded by family. We celebrate his going on to be with our Lord and Saviour, Jesus Christ, and his loving wife, Shirley, who passed September, 2010.
He will be sadly missed by his children, Linda (Jamie) Burke, Derrill (Louise) Hancox, and Todd (Pauline) Hancox; his grandchildren, Ashley, Steven , Michael, Josh and Hallee, his siblings, El Hancox, Brenda Hancox, and Terry (Leona) Hancox, and a large extended family along with his church family and friends.
Dad was born in Winnipeg, Manitoba in 1936. Living through difficult times in his early years through the Second World War, he had a very close relationship with his older brother, Elwin. The two remained incredibly close through teenage years, raising families, and working together often. They enjoyed golfing together almost daily, year round for the last few years. He stayed in touch with close lifelong friends "Moe" and Ivan, as well as others. He met his wife Shirley as they travelled on the same bus daily back in the day.
He married the love of his life on September 1, 1956, and enjoyed over 50 years together. Dad was a contestant in the '65 and '66 Mr. Manitoba contests. Working sometimes two and three jobs to support the family, he wrote a remarkable thesis on driving safety, gaining him a mark of 100% to become a driving instructor. He worked for CNR for 34 years becoming the Supervisor of the Reproduction Centre (printing shop) before retiring at the young age of 52.
Along the way, he took up running and ran in the first Manitoba Marathon in 1979 and a couple more after that. In 32 years of retirement, he enjoyed golfing year round and had two hole in ones. He taught many things just by example. Always a smile on his face, he made you feel like you were the only person in the room. That smile remained till the end as nurses and orderlies would comment on it every time they entered his room.
Thank you Grace Hospital staff for taking such good care of Dad in those last difficult months.
A Celebration of Life service will be announced at a later date.

Condolences may be left on
William Hancox's page at
www.interlakecremation.ca