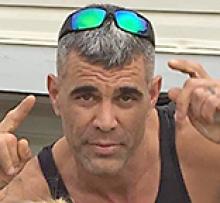 Tragically, in Victoria, BC, on October 26, 2020, at age 44, Jon Novak left this life to join his brother, Kyle.
Jon is mourned by his children, who were the core of his heart: Emily, Rival, Ryder and Logan. Jon was the beloved second son of Wendy and Lorne Novak. He is survived by brother Bryan, wife Angie and nephew Hunter; and sister Laura. He also leaves his uncle Larry Good, wife Carole, cousins Jessi and Dominic; uncle Blair Good, cousins Hollie, Sara and Ethan; aunt Marilyn DeLeeuw, husband Bert, and cousin Chris; and a large extended family of aunts, uncles, cousins and friends.
Jon was predeceased by his younger brother Kyle, grandparents, Lionel and Eleanor Good; uncles, Gerald Good and Rick Good; grandparents, Edward and Evelyn Novak; and cousin Rob DeLeeuw.
Born February 23, 1976, Jon was dark-haired and dark-eyed. Jon's eyes sparkled with mischief above his perpetual smile. He was a happy child, never sitting still for a minute. He loved to find out how things worked; quite often his new toy or game would be in pieces on the floor shortly after receiving it. He would put it back together, good as new, and continue to play. Hockey was Jon's favourite sport. He played for the Interlake Lightning inaugural team and SJHL Nipawin Hawks until an injury sidelined him forever at just 18. He loved to be at grandma and grandpa's farm, driving the trucks and tractors, and helping out. Of course, when he could, he would go for a rip on the motorcycle, quad or snowmobile.
Life led him to Alberta and British Columbia, where he worked in the oil fields. He got into construction and eventually became an accomplished welder, earning his Red Seal certification in both carpentry and welding. Hard work was something Jon was never afraid of. Eventually he owned and operated his own welding company.
Jon had a heart of gold and was always willing to lend a helping hand. Jon was compassionate; he would give you the shirt off his back, even if it was the last one he had. He made friends easily with everyone; it didn't matter where you came from or who you were. Jon loved deeply; his signature was a pink rose that he would deliver to someone he loved or was thinking of, or who he thought needed something to make them smile. Jon was a hugger, wrapping those big strong arms gently around those he loved. "Love you" was texted almost daily to his mom.
Jon never forgot a birthday or a telephone number. He had a terrific sense of humour, and he loved practical jokes. He drank too much Timmie's. Jon shared his love of ice fishing, skating, quadding, bonfires, and so on with his boys. Jon was such a strong person, and he overcame so many of the challenges that life put in his way. His favourite poem was "Footprints". Jon sported numerous tattoos to honour those he loved, or to represent what he believed: his brother Kyle, his children, Emily, Rival, Ryder and Logan, and his most recent one that read, "Only God Can Judge Me".

Jon, your struggles are finally over. Rest Peacefully. We will see you again one day! "Love you more" - always and forever!

A private graveside gathering took place Monday, November 9, 2020, at Stonewall Cemetery.
Donations in memory of Jon Novak can be made to the Bruce Oake Recovery Centre in Winnipeg, MB. https://www.bruceoakerecoverycentre.ca/ or a charity of one's choice.
The family is indebted to Jon's Uncle Blair and Ken Loehmer for making the arrangements to bring Jon "home" to Manitoba.