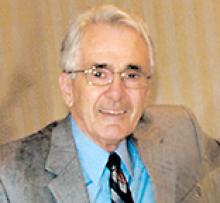 Antony (Tony) Wiebe passed away suddenly at his home of cardiac arrest.
He will be greatly missed by his beloved wife, Olive, daughters, Carolyn (Brent) and Myra (Dean), and grandchildren, Alex, Aaron, and Emelia. He is survived by one brother, Ed, and several sister and brother in-laws. He was predeased by his parents, Abram and Katharina (nee Toews) and siblings, Jake, Neil, John, Helen, Mary, and Anne.
Tony grew up on the family farm southeast of Plum Coulee, Manitoba, attending grade 11 at Altona Collegiate and grade 12 at the Mennonite Collegiate Institute. Tony received his teacher's training from the Provincial Normal School and taught in the country school of Kleinstadt for 3 years. He graduated with a B.A. in 1961 from the University of Manitoba, majoring in english and history.
In 1959, he met Olive Pries, the love of his life, when they were both teaching in southern Manitoba. They were married August 4, 1961. They lived in Winnipeg, with the last 54 years in their house in Fort Richmond.
After teaching for some years, Tony went back to the University of Manitoba, and received his B.S.W and M.S.W, and worked for the Provincial Government Social Services. For most of his career, he worked at the Family Bureau (later called Family Services and then Family Centre) as a marriage and family counsellor. After 30 years with the agency, he retired in 1999.
Tony was a kind, considerate person and a man of his word. He was always patient, empathetic, and helpful, with a sense of humour. He will be lovingly remembered by his family.
A private burial is planned. A memorial service might be held at a later date.
His obituary can also be viewed at Friends Funeral Service (www.friendfs.ca).