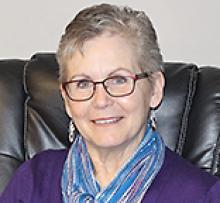 It is with heavy hearts that we announce the passing of Marcy; loving wife, mother and grandma, on November 10, 2020 at St. Boniface Hospital, with her sweetheart by her side.
She leaves to mourn her loving and devoted husband of 45 years, Dennis; her children, Shawn (Janet), Ryan (Talia), Kelsey (Crystal) and Kevan (Lesley); her grandchildren, Jack, Miya, Kendra, Aida, Ellie, Ethan, Addy and Penny; as well as other family and friends.
Marcy was born and raised in Winnipeg. Marcy worked at Dominion Foods, where she met the love of her life. On August 9, 1975, Dennis and Marcy married. Their first son, Shawn, came in 1980. In 1982, they designed, built and moved into their forever home. Three sons followed in quick order and by November of 1985, Marcy was a mom to four boys under five! Throughout her adult life, Marcy had a variety of careers. She started as an elementary teacher. After taking a period of time off to raise her boys, she became the teacher/director of a preschool, even teaching her own boys. Later, she took a part-time job as a clerk at Penner Foods. Over the years, she worked her way up and became a store manager at multiple Sobeys stores. She then moved to Winners, managing the Pembina store. Later in life, Marcy changed careers, becoming an office manager at People First, before retiring to take care of her health.
The most important thing to Marcy was her family. Spending time with Dennis; travelling, going out to dinner, or catching a show; spending time with her sons and their wives, especially enjoying when the whole Martens clan would gather for Sunday dinners. Her eight precious grandkids loved and adored their "Grandma Marty." In the last few years, Marcy spent endless hours sewing and crafting, making her grandkids treasures they could hold onto, and remember her by. Mom, for the last seven years, you put up the greatest fight against cancer with such strength and courage. We are so proud of you. Although we will miss you more than words can ever express, we are glad that you are at peace and free of pain. We love you so much and are better people, because of how you have taught us and loved us unconditionally.
A special thank you to the amazing staff on 3B at St. Boniface Hospital, who cared for Marcy so well these last few weeks, and to the staff at St. Boniface CancerCare for their care and support these past seven years.
Due to current restrictions, a Celebration of Life will be held at a later date.
In lieu of flowers, please consider making a donation to Ovarian Cancer Canada.