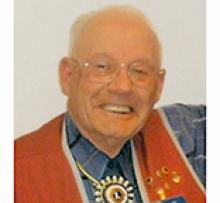 It is with heavy hearts that we announce the passing of, Mel Sampson, at the age of 92 years.
Mel passed away peacefully on November 10, 2020, at his home in Rosewood Lodge, with his wife of 37 years, Ruth by his side.
Mel was born July 31, 1928, in the town of Greenway, Manitoba. He attended elementary school in Pelican Lake, and later high school in Belmont, Manitoba. As a young man, in 1949, Mel moved to Brandon to work driving truck, hauling asphalt to build the highways. In 1953, he moved to Winnipeg to start his much loved career with the Winnipeg Tribune newspaper. Mel worked there for 27 years until it's closure in 1980. He then started working for the Winnipeg Sun until his retirement.
Mel was first married in Brandon in 1951, to Mildred (known as Bonnie), and together they had two daughters; Donna (Hector) and Donalda (known as Debbie) who both have made their homes in Ontario. Bonnie passed away from diabetes in 1982. In 1983, Mel met Ruth Lefebvre (nee Appleyard) at a dance at the Odd Fellows Hall in Stonewall. They married October 15 of the same year and made their home in Winnipeg for a couple short years until Ruth retired in 1985 and then they made the move to Stonewall to spend their retirement years.
Ruth and Mel continued their lifelong love of dancing and music together for over 30 years attending dances and fiddle festivals, taking them on road trips all over southern Manitoba, making many wonderful friends along the way.
Mel believed strongly in volunteering to better his community and it's members. Mel volunteered in many capacities including driving seniors to and from doctors' appointments in Winnipeg, helping with fundraisers and many more local ventures. A testament to that is when Mel and Ruth spent 22 years in Weslaco, Texas as Snowbirds at the Pine to Palm trailer park. He volunteered as the dance and entertainment director, sports director and assistant director. Two of his strongest passions were the South Interlake Seniors Resource Council, and of course, the Lions Club. Mel drove the handy van for seven years and this experience allowed him to recognize a need for an organization to advocate on behalf of the seniors in the community. Mel was instrumental in co-founding the South Interlake Seniors Resource Council and acting as a director for over 25 years. Mel was also a passionate member of the Stonewall Lions Club since 1986 earning many awards for his dedicated and loyal 32 years of service such as the Harry A. Newman Diabetes Award in 2007, and an award for distinguished achievements in 2015/2016. He held many positions over the years, including chair for Cavalcade in 2003 and President of the local chapter in 1991/1992. He is now resting peacfully with his beloved ones.
Due to current COVID restrictions, there will be no service at this time.
In Lieu of flowers, donations can be made to South Interlake Seniors Resource Council.
Ruth would like to send a special thank you to the staff at Rosewood Lodge for their loving care of Mel over the last two years.

"Life is like dancing, it's not about getting from one place to another,
it's about enjoying every step."
-Author Unknown