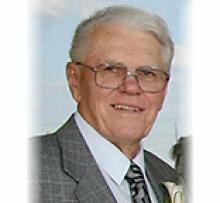 It is with great sadness, that we announce the peaceful passing of William Tomchuk on November 11, 2020.
William will be lovingly remembered and missed by his wife Helen of 63 years, six sons and their families, Stan and Gina, Dan and wife Janet, Jim and wife Denise, Nick, Bern and Karen, Tim and wife Kim. Grand and great-grandchildren, Jennifer (Caleb, Claire), Amanda and Josh, Chelsea and Trevor
(Scotia), Kaitlyn and Josh, Steve and Michelle (Mason), Nichole, Colton, Chad and Atlanta (Skyler, Jacius), sister Anne, nephew Gene and family.
William was predeceased by his parents, Paraska and John Tomchuk, sister Mary and grandson Troy.
Pallbearers will be William's sons,
grandson Colton Tomchuk and Ron Tanchuk
William was born in Fisher Branch, MB. As a young man he purchased farmland adjacent to his parents. He loved working the land and even called his place "Heaven". He also took time out to enjoy fishing, hunting or just being outdoors. Throughout his life he
escaped to the country every chance he had. In 1956 he joined Winnipeg Transit as a bus driver, retiring 33 ½ years later. He received several awards for safe driving, among them, Driver of the year in 1985.
William was a member of Blessed Virgin Mary Church, where he enjoyed volunteering driving the church van and other duties, but most of all the Perogy Project.
The family would like to thank all the staff at Maples Personal Care Home, where he was a resident since April, 2017. Thanks also to Father Volodymyr Bashutskyy and Father
Isidore Dziadyk for your visits.
Flowers gratefully declined, and donations may be made in William's memory to Blessed Virgin Mary Church, CancerCare, Autism
Society or Alzheimer Society.
Due to COVID-19 restrictions there will be a private family funeral only.