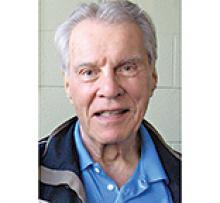 Michael (Mike) Skwark passed away suddenly on the afternoon of November 9, 2020, at the age of 89.
Mike was predeceased by his sister Mary Pidzamecky, his brothers-in-law Peter Esaruk and Victor Jasper, his sister-in-law Darlene Jasper and his nephew Michael Pidzamecky.
Mike is survived by Ruth, his loving wife of 67 years, his children, David (Vivian), Kelli (Rob), and Brenda Reaves; his grandchildren Ryan (Alanna), Jordan (Amber), Michael, Meaghan (Shawn) and Cole; his great-grandchildren Kanen, Kamilla and Mackenzie; brother-in-law Karol Pidzamecky, sister-in-law Penny Esaruk, Uncle John Sokol and his family, and many nieces and nephews.
As a young man, Mike played basketball with the Winnipeg Stellars, a team of north end guys who played together at the local Stella Mission . Mike was chosen as the captain of the team and was nicknamed "The Take Charge Kid". Mike played with the Stellars when they won the Canadian Junior Basketball Championships in 1950 and again in 1951. The team was inducted into the Manitoba Sports Hall of Fame in 1995. Mike and his teammates remained life-long friends.
Mike worked hard to put himself through university and just before starting law school he married his high school sweetheart Ruth. In 1958 he graduated with his law degree and had his son, the first of his three children. His daughters followed in 1960 and 1961.
Mike had a professional reputation as an excellent lawyer and a gentleman. Over his years of practice as a commercial lawyer, he attracted loyal business clients, and many became lifelong friends.
Mike was appointed Queen's counsel in 1976 in recognition of his contributions to the practice of law and was honoured by the Law Society for his 50 years in practice in 2008.
Mike was also an astute but private businessman who used his skills throughout his life to provide for and support his family and to advise and help his friends.
As a husband and father, Mike was a pillar of strength. Mike and Ruth were married for 67 years and remained true loving partners to the end. Mike wasn't that vocal, but he watched over, guided, and protected every member of the family. As the family grew, Mike welcomed his children's spouses and cared for them in the same way.
Over the years Mike gave a lot of sage advice to both family and friends. He always had an answer to a question and a solution for any problem or concern and he was most often proven right.
Mike made time to attend special events for his grandchildren because all of his grandchildren were special to him. He especially enjoyed their sporting events where he "cheered" silently and always watched with pride. He was also proud to be a great-grandfather. All three great-grandchildren are very young and live far away from Winnipeg, so Mike looked forward to watching them grow through the photos he received and their FaceTime visits. He faithfully printed the emailed photos and posted them where he could see them every day.
Mike's softer side was also on display when he would sneak treats to his "grand-dogs" Izzy and Rocco or sit carefully as they snoozed on his lap.
Mike's success in sports, law, business and life can be traced back to his humble beginnings in Winnipeg's north end, his unparalleled work ethic, his stubborn perseverance through adversity and his commitment to always giving his best, no matter what he did.
Gone suddenly and too soon, Mike lives on in our hearts and will be remembered forever as a loving and generous husband, father, father-in-law, uncle, brother-in-law, grandpa, great-grandpa and friend. We will love and miss him always.
In keeping with Mike's wishes there will be no funeral and instead of flowers, if you wish, please make a donation to the Winnipeg Humane Society or a charity of your choosing.


(Friday lunch will never be the same.)