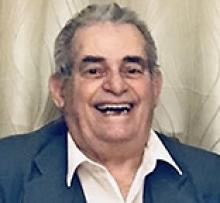 On Wednesday, November 11, 2020, Manuel dos Santos de Sousa Calisto, surrounded by love, passed away at the age of 88.
Manuel is survived by his daughter Eddie (Gilbert) and five sons, Joe (Karen), George (Laura), Emanuel (Bradley), Luis (Lucy) Carlos (Judy); grandchildren, Kristle (Mike), Christopher (Cheryl), Khorie (Patricia), Shawn (Kelly), Shane (Rita), Kevin, Laura, Ashley and Chaise; great-grandchildren, Kaitlyn, Kalista, Alexander and Jonathan; sisters, Luisa, Almorinda and Fatima (Manuel) and many nieces, nephews and cousins. Manuel was predeceased by his wife Jesuina; father José; mother Maria Virginia.
Manuel was born November 1, 1932 in Livramento, São Miguel, Açores, Portugal. He was a visionary and took risks beyond what most people living under a dictatorship would dare to do. He built two homes, as his family continued to grow, and invested in real estate. When his parents were about to get evicted from their family home, he bought the house so that his beloved mother and father could continue to live there. He shared what he had with those who had less. He loved celebrating - inviting people from the village to his annual New Year's Eve celebration - where there was lots of food and wine.
He was charismatic and built relationships all over the island. He was the first in his village to own a car and would often be seen driving people around the island to visit family or say goodbyes to those immigrating abroad. He made a living as a baker and delivered bread to the various villages on the island. He gave many their first jobs - including his two eldest sons, Joe and George - who at young age, would help out on deliveries before heading to school. He taught his daughter how to do the accounting for the business at seven years old. He was always seeing the potential and capabilities of his children.
In 1972, he immigrated to Winnipeg, Canada with his wife and six children. Since no one would rent a house to a family with six kids, he used the little money he saved to buy his first house in the west end. He was often heard telling his wife - who at first had a hard time adapting to Winnipeg's cold weather and way of life - "tem couragem." He continued to invest in real estate - always renovating and expanding the family home - leaving the street looking better as he moved to another area.
He instilled a strong work ethic in all of his children. He believed: if you work hard and make a life here, Canada provides you with many opportunities." He worked hard, first in commercial cleaning, then later construction and production at Dominion Tanners, and ConForce Industries for 25 years until his retirement.
He loved Canada for all the opportunities and freedom that it provided him and his family. After his wife passed away 25 years ago, he continued living in the family home, with fierce independence. He loved gardening and sharing his harvest with his family, friends and neighbours. He loved soccer and the Red and White Benfica.
In 2019, Manuel was diagnosed with advanced dementia, and his children had to make the heartbreaking decision to move him into Maples Care Home, where he adapted and lived until he tested positive for Covid-19 and died two weeks later. Even in his advanced age and condition, he made friends wherever he went. He had his favourite health care professionals at the home, and was blessed to have his favourite nurse with him and three of his children by his side as he left this world, surrounded by love and light.
Burial will be on November 17, 2020 at 10:00 a.m. at Holy Family Cemetery and an FM system will broadcast the service to those in their cars. We ask that you respect Covid-19 protocols and attend accordingly. A celebration of his life will be planned at a later date.
In lieu of flowers, donations can be made to the Alzheimer's Society of Manitoba in Manuel's memory.