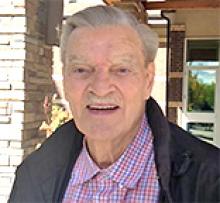 It is with great sadness and heavy hearts, that we announce the sudden passing of Bill Barr, at the age of 95, at the Victoria Hospital.
Bill is survived by his beautiful wife of 70 years, Doris, his daughter, Jane Pereux (Rene); son, Dan Barr (Michele); grandchildren; Ray Pereux (Lisa), Lianne Pereux (Daniel Billinkoff), Ryan Copen (Tegan), Logan Copen (Camille), Will Janssen (Gill), Erin Janssen, and Michael Janssen (Stephanie Strempler); great-grandchildren, Shyla, Sadie, Rae-Ann, Nathan, Aria, Luke and Lydia.
He was predeceased by his daughter, Nancy Barr in 2011, as well as brothers and sisters, Lou Barr, Doris Barr, Eileen Pound, and Art Barr.
Bill was a devoted husband and father. He loved Doris and they had the most wonderful relationship right up to Bill's passing. They were a kind, considerate, and loving couple and a great role model for their children. Bill made everyone in his family feel special and loved. Birthdays, Christmas, Halloween and Canada Day amongst others were always special with Bill.
Bill loved to laugh and he loved to make others laugh. He was very quick witted in a kind and seemingly innocent way that was both funny and charming. He rarely failed at coming back with a humorous reply or answer to almost any form of comment, inquiry or social situation.
Bill worked with the Canadian Pacific Railway for 44 years. Starting as a wiper of the engines at the age of 16 and, after stints as a brakeman and a fireman, he became an engineer during the age of steam-powered locomotion. During his career, Bill was a proud member of and always active in the Brotherhood of Locomotive Engineers. He served on numerous committees and delegations dealing with his union's functions. Bill was also an active member of the retired railway engineer's community, organizing luncheons, relief drives and other functions.
Bill had many hobbies, interests and pursuits, too numerous to mention. Everywhere he went, in almost every one of the clubs, committees, coffee klatches or carver's clutches, Bill had an impact and a positive influence on people and events.
Bill lived his entire life with a positive attitude and a love of people. He had a ridiculous sense of humor which brought laughter and joy to everyone he met. He made many friends throughout his life and he will be missed by all.
Our family would like to thank the staff at Dakota House, and all the friends he made there for the kindness and care given to Bill over the years.

Condolences may be left on Bill's Memorial page at www.GreenAcresFuneralHome.com