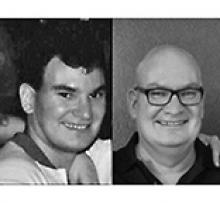 It is with great sadness that we announce the passing of our husband and father, Randy Scharnik, on November 5, 2020.
Randy was born on May 26, 1960 in Winnipeg.
Randy is survived by his wife of 35 years, Hazel; children, Lindsay (Ian), and Mitch; siblings, Richard (Trish), and Barbara (Dennis); and nieces, Stacy and Rylee; the Kotz family – sisters-in-law, brothers-in-law; and many nieces and nephews; as well as many close family friends. Randy is predeceased by his parents, Mollie and Bernard Scharnik; in-laws, Kay Kotz and Mytro Kotz; brother-in-law, Ron; and nephew, Leigh.
Randy was born and raised in Elmwood, growing up a few houses down from his best friend, Peter. The two were inseparable as children, and continued their friendship as they grew older. After graduating from Elmwood High, Randy went to Red River College where he met the love of his life, Hazel. After graduating from Red River, he began his career at Canada Revenue Agency, where he worked for 35 years, and made many lifelong friends. Randy and Hazel built a house in North Kildonan, not straying too far from his family and Elmwood friends that he grew up with. He loved his Elmwood crowd.
Randy's passion was his home, his family and friends. He spent much of his time raising his kids, and taking them to hockey and swimming. He enjoyed cooking for his family, and was famous for his delicious home-made pizza and apple crumble. Randy doted on his mother, taking care of her and her home for many years. Gardening was a passion he shared with others. Randy enjoyed travelling to some hot destinations, but most of the time he enjoyed being at home, spending time in his backyard enjoying the sun, garden and blasting some tunes. Summer memories include times at the beach - Randy enjoyed having fun in the water. Randy retired in 2015, spending much of his time with his furry friend, Sugar. Randy and Hazel bought a cabin at Betula Lake, to spend time with family and friends.
Randy will be remembered as a very kind and loving man. He always had a kind word for everyone, and had a fondness for creating nicknames for those close to him. Our world will not be the same without him. He will be deeply missed and never forgotten.
A big thank you to the staff at CancerCare, the Thoracic Surgery Clinic at HSC, and Riverview Health Centre for the care provided to Randy. A special thank you to Dr. James Paul.
Those who wish may make a donation to CancerCare Manitoba in Randy's honour.
A private family burial has taken place.