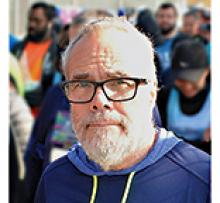 It is with deep sadness that we announce Barry Atkinson passed away peacefully at his home in Morden, MB, on November 11, 2020, at 25,999 days young.
A private service will be held virtually.
Barry is lovingly remembered by his wife Sandra; daughters, Tracey and Cara (Doran); grandchildren, Eric, Jesse, Chase, and Taylor. Barry's extended families in Manitoba and England also miss him dearly. Barry was predeceased by his first wife Jacqueline (Jackie) Atkinson nee Barlow, son Sean Byrne, grandson Dean Byrne; parents, Cyril and Rose Atkinson; brothers, Derrick and Brian; sister Doreen and brother-in-law Tom.
Barry was born in York, England on August 22, 1948 and spent his youth tracking trains at York Station stoking a passion for trains that was never extinguished. Barry moved to Norwich for his university education where he met Jackie and graduated with a degree in maths, before going on to become a Chartered Accountant. In 1976 the family moved to Winnipeg, Canada for a job opportunity.
Barry met Sandra in 2004 and they married in 2008. Sandra brought a joy to Barry that you could see. His eyes twinkled. He is so loved by her, and he loved her so. Sandra's family welcomed him with open arms and loved him like everyone who met him did.
Barry was also an avid runner and headed home in 2018 where he ran the York marathon. He dreamed of sharing York with his grandchildren and was thrilled that Eric made it to York to cheer him on. He was in training for his next marathon and loved the gym Sandra set up for him in the garage so he could train through the winter.

There is so much more we could share,
but we will end with this...
We love you Barry, Dad, G'dad.

Memorial donations may be made to the Manitoba Heart & Stroke Foundation.