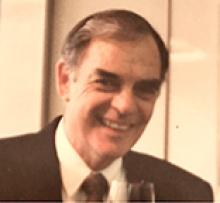 
In memory of Alexander Everett Rattray
who passed away November 25, 2019.


Alex is greatly missed by his beloved wife, Angela Luvera Rattray; daughters, Alexandra and Jennifer Rattray; Jennifer's husband, Stacy Dainard; grandson Tristan Dainard; brother Donald Rattray and family; and many friends, colleagues and former students around the world.
Alex was principled, creative, intelligent, curious and kind. He was an exceptional human being who saw the best in everyone and the beauty in the world. He was a devoted husband, father and grandfather, and we miss him deeply as we mark the first anniversary of his passing.
After earning a Bachelor of Architecture degree at the University of Manitoba, Alex was awarded one of the first Canada Council Fellowships and pursued a Master of Landscape Architecture degree at the University of Pennsylvania, winning the School of Fine Arts Award. On graduation he worked in Boston and Worchester before becoming chair of the Lowthorpe Department of Landscape Architecture at the Rhode Island School of Design. In 1969 he was invited to return home to create and lead a program of landscape architecture at the University of Manitoba.
Alex was committed to Winnipeg, the Prairies, his university and his students, where he became a gifted professor with a passion for the living landscape, design and public space. He and Angela were
co-directors of the Italian Studies Program, and for a decade they introduced students to the history, culture, architecture and landscape of the Brenta Valley region. On retirement, he was named a Senior Scholar and then a Professor Emeritus in recognition of his distinguished service.
Alex explored the world, lecturing and teaching in countries from India to Indonesia. He was a Visiting Professor at universities in Edinburgh, Melbourne, Toronto and New Mexico and an Advisory Professor at the Chongqinq University of Architecture and Engineering and at the Southwest Jiaotong University.
Alex was President of the Canadian Society of Landscape Architects and the Manitoba Association of Landscape Architects and an advisor to the International Federation of Landscape Architects. He served on numerous national boards and committees, including chairing the National Capital Commission's Advisory Committee on Design. He challenged his profession, his students and himself to be more responsive to the environment and the community.
His family would like to extend their gratitude for donations made to the Alexander E. Rattray Scholarship in Landscape Architecture at the University of Manitoba. The endowed award supports international students and is a tribute to everything Alex believed in.

When death's dark stream I ferry o'er,
A time that surely shall come;
In Heaven itself, I'll ask no more,
Than just a Highland welcome.