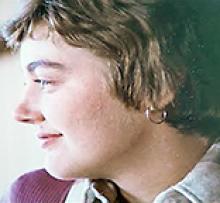 Peacefully and with great courage on November 11, 2020, Debra Walker (Debbie), aged 68 years, started a new journey where many loved ones were waiting to embrace her gentle spirit. Close family were able to take turns to be by her side. She will be so lovingly remembered in our hearts as a one brave soul.
Debbie was born on February 19, 1952, at the historic site of the old Grace Hospital here in Winnipeg, Manitoba. Debbie attended Mulvey Elementary School and then went on to graduate from Gordon Bell High. Entering into a career in banking she married Bill Patterson and started a family while residing in Regina, Saskatchewan. They returned to Winnipeg in 1982.
Debbie could be the life of a party, instantly making people feel comfortable with her quick wit, along with her kind and loving personality. Life was never dull around our Deb. Those who knew her were also well aware of her deep love for a great cup of java and her enjoyment of a good mystery read. Her fondness for family was often expressed and she was one to always put the needs of her boys before her own. In 1998, Debbie remarried and started a new adventurous life with James Kelvin Walker. She was predeceased by him in 2014.
In the last decade of her life, Debbie enjoyed a few trips to Ireland and Scotland where she made some treasured friendships that she valued very much, especially Linda (or fondly referred to as "Witchy"). She recently had also developed a great penchant for chocolate, pop and dining out. She looked so forward to family joining her for burgers or good eats at many of her favourite haunts.
Debbie was also predeceased by her father, Donovan Aikens in 1974, but is survived by her mother Jean; her sisters, Pamela (Wayne) Small of Alberta, and Lee-Anne; her three treasured sons, Cory, Curt, and Kyle; by grandchildren, Summer, Kayla, and Hunter, as well as many nephews and one special niece!
Those wishing to do so may make a charitable donation in memory of Debra at CancerCare Manitoba or at a charity of their choice.
An interment service will be held at a future date at Rossendale Cemetery, near Lavenham, Manitoba.