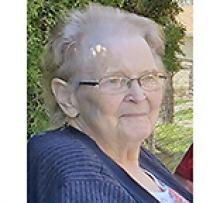 Arlene was born to parents, August and Clara Schalla on September 25, 1943, and grew up in Tisdale, Saskatchewan. When she was 10 the family moved to a small house on Piccadilly Street in Winnipeg. She lived there with her parents and three younger siblings until she met and married Mike Matwiy in 1964.
Arlene was primarily a homemaker and caretaker to her family, but she also had an assortment of jobs as time and family permitted. She worked at the Canada Wheat Board, the Freshwater Fish Marketing Corporation, Walmart, and a few local businesses. Arlene loved to cook, and one of the greatest pleasures she had was to have the whole family over for dinner. No one left her table hungry, and she made sure we each took some home for lunch tomorrow.
When her boys were young, she would be taking them to swimming or soccer or hockey, and with all three of them in sports and activities it is a wonder she was able to keep up with it all, but she was. She had a very busy social life as well. She was a longtime member of a social group called "Transcona Friends and Neighbours" and took her turn at arranging outings to local attractions, eateries, or touring a utility or some other interesting businesses. She was a very busy lady!
Arlene will be dearly missed by her husband Mike; her three sons, Jarod, Keith, Brendon, and their families; her siblings, Melba and Darrell, and many friends. She is predeceased by her parents and her sister Linda.
At Arlene's request, no formal services will be held.
For anyone wishing to honour Arlene's memory, we might suggest a donation to the Heart & Stroke Foundation. That would have made her very happy.