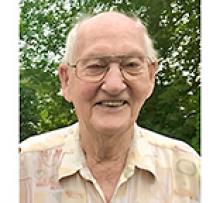 Last week we said farewell to the one and only, Charlie McIntyre, who passed away peacefully on Sunday, November 15, 2020, at the young age of 95.
In 1951 Charlie married Vyvian (Hawkins), whom we lost in 1988. Together they raised eight (yes eight!) children: Lindsay (Charlene), Nancy (Bill), Barry (Brenda), Janice (Domenic), Brenda (Andre), Ian (Ginger), Cameron and Alanna (Wade). He was also a well-loved grandpa to Karen, Heather, Graham, Tyler, Lee, Zig, Jesse, Scarlette, Vyana, Sam, Gabe, Amy, Annie and Sydney, and great-grandpa to Hayley, Zahya, Isadora, Violet, and Lark.
Born in Clearwater and growing up in Great Falls, Manitoba, Charlie started out with very little, but this helped to build his strength and fortitude and he persevered, taking on pretty much any job he could, from hauling wood to putting out forest fires. Charlie proudly graduated from Engineering at the University of Manitoba in 1953, and was a long-term member of the Professional Engineers Association. Being an engineer, he was known for being able to fix things, from cars and appliances, to the kids' bikes or the dock at the cottage. Charlie also drew upon his engineering background in his work with the Manitoba government, which spanned decades.
Community service was important to Charlie. He belonged to the Sertoma Club and was active with the church. He was always willing to help when the call came in to repair or paint something, all the while whistling while he worked.
Growing up in a log cabin in the woods gave Charlie a connection with the outdoors, and through family camping trips across Canada, and time spent at the cottage, his eight kids gained the same. He was also able to share this passion with his grandchildren. The family travelled extensively throughout Canada on their annual camping trips, stopping to read EVERY sign at points of interest along the way.
Later in life, Charlie was lucky enough to find Joan Anderson, a former school teacher, whom he married in 1991 and happily spent the rest of his life with. Following his marriage to Joan, Charlie became a stepfather to Duranne, Susan and Neal (Shelley), as well as grandpa to Robyn, Erin, Lukas, Avery, Hailey, Emma Jane, Chris and William. They moved to Maple Ridge, BC, in 1992, and opposite to what most prairie retirees do, they moved back to enjoy the blustery Winnipeg winters, in 2004.
His active lifestyle continued into his late 80s, and Charlie walked wherever he could. Charlie's kids discovered early on that these were not leisurely walks, as they almost had to run to keep up with his long legs. He golfed for years, both in Winnipeg and Maple Ridge. He was also a fixture at the Charleswood Curling Club, curling for a number of years, and making it to Provincials one year.
Charlie was a dedicated father, and, of utmost importance to him, was for his kids to get along and enjoy being with each other. In this, he was immensely successful. Much family time, at the cottage or on holidays, or just after dinner and on rainy or wintery days, involved puzzles and games, in particular card games. In addition to bringing the family together for fun, such past-times taught gamesmanship and strategy.
All eight of Charlie's kids owe a lot to their dad. He was a kind, gentle, and patient man, and will be missed, but his teachings and loving traits will carry on through them.