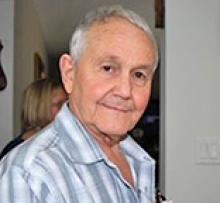 Peacefully after a courageous battle with Lewy Body Dementia, complicated by Covid-19, at the age of 77, Henry passed away on November 16, 2020. He was born in Treherne, MB on April 29, 1943, son of Alphonse and Mary Van Hulle.
Henry is survived by his beloved wife Marlaine, of 57 years; his four beautiful, loving daughters, Lorie (Bernie), Cheryl, Wendi (Byron) and Tammy (Richard); his pride and joy, his grandchildren, Lindsay (Jason), Tanner (Mel), Skylur (Krista), Colton, Brittany (Carlos), Brooke, Eric and Bree-Ann; and the center of his universe his great-grandchildren, Nash and Tia. We cannot stress enough how proud and how much he loved his family, they are #1 to him. Henry is also survived by his sisters, Marie Channel, Linda Joyce, and his sister-in-law Joyce Van Hulle. He was predeceased by his brother Edward Van Hulle.
Henry was an extremely hard worker. He was employed with Canada Post for 35 years; over those years he built an amazing elastic collection that he used for almost anything. Henry also owned a taxi for 20 years, and in his retirement years, enjoyed driving a school bus.
Later in life Henry enjoyed working in his yard and tinkering in his garage. He enjoyed listening to music, particularly Elvis, Neil Diamond and The Doors. Henry always waited patiently for December to arrive to start his traditional "Christmas Decorating", and boy oh boy did he decorate the house, while listening to Elvis Christmas songs for three days on repeat. Henry appreciated the love, support, and kind words his family had throughout his illness.
As per Henry's wishes there will be no funeral.
In lieu of flowers, please donate to the Alzheimer Society of Manitoba (Dementia Lewy Body), 10 - 120 Donald St., Winnipeg, MB R3C 4G2.

"We Will all Have a Blue Christmas
Without You"
"I'll Be Looking at the Moon,
But I'll Be Seeing You"