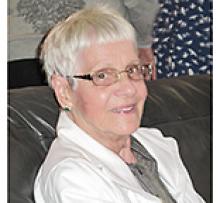 We are saddened to announce the passing of Thérèse Catellier, she was 92 years old.
Born on the eve of the Great Depression in 1928, in St. Elizabeth, MB, the eighth child in a family of 18 children; she was a great help to her parents in helping to care for her younger siblings, some of whom looked upon her as a mother figure in their growing years.
In 1946, Thérèse married Germain Catellier. They settled into farm life in Dufrost, MB where she also continued to care for some of her younger siblings, as well as other family members who found themselves in need. During this time, she became a mother to Richard, Aline, and later, Lorraine. Farming and all that it entailed was her life until 1957, when she and Germain sold the property and bought a hotel in Grahamdale, MB. They continued in business, building a new motel, and managing another hotel in Holland, MB. Thérèse assisted her husband, ran the restaurant, and managed the staff during the late 60s and early 70s. They later retired and moved to Winnipeg.
Thérèse found herself a widow at the early age of 52, when Germain, her husband of 34 years, predeceased her in 1980. She still had her youngest 12 year old daughter to care for, and by that time also had several grandchildren.
Thérèse enjoyed dancing, gardening, bowling, visiting with friends and family. In 2000, she met Louis, who shared her love of dancing. Over the years, they became dear friends, doing everything together; from church services on a Sunday evening to dancing, bowling, watching polo, or just going out for coffee. He put a spark in her life, and made the last twenty years of her life full of activity and joy.
Thérèse is survived by her three children, Richard (Inga), Aline Peasgood (Al), and Lorraine Catellier. Her legacy includes grandchildren, Rick (Christine), Aaron (Rachel), Aimée Benjamin (Earl), Ryan and Jason Peasgood. She also has four great-grandchildren.
The family would like to thank Dr. Blom and the staff at Riverview Health Centre for the loving care provided for our mother.
Due to Covid-19 restrictions, there will be no service at this time.