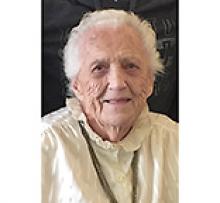 Born September 10, 1916 to Frank and Annie (Cole) Groff; predeceased by her loving husband Albert O. Zeemel (1980), her granddaughter Heather Keay (1993), her eldest son John (2003) and daughter Carol Keay (2006). Also predeceased by her four brothers, Robert, Douglas, Ted and Alan Groff, and sister Margaret. She is survived by three of her children, Robert (Sandy) Zeemel, Ed Zeemel, Maree Sigurdson, 10 grandchildren, 23 great-grandchildren and one great-great-grandson Levi.
'Granny' passed away peacefully on November 11, 2020, at home, in her sleep.
She was born and raised in Winnipeg and was successful in pursuing a career in teaching until she met the love of her life Albert and was married in 1940.
After the marriage they travelled to Holtyre where they lived until 1953, after which they returned to Winnipeg. With the polio epidemic happening, they decided to purchase a cabin on Lake of the Woods, which later became known as Camp Granny.
She was a dedicated member of the United Church, and most instrumental in establishing the Meadow-Wood United Church where she was active until she was called to do her service from above.
We would like to thank Sue Groff (2020) and Shari (Groff) Barker for always being there, they were a big part of Granny's life.
Family was everything to Granny, be it her own family or her church family. She was always strong willed, and never backed down from a challenge. She will be dearly missed by too many to count. As she would always say, "A card laid is a card played".
In lieu of flowers, donations can be made to Canadian Cancer Society or Canadian Cystic Fibrosis Society.
A Celebration of Life to be held at a later date.