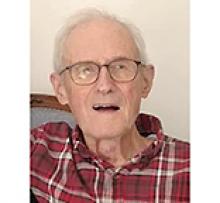 Garrath (Garry) A. Germain, 88, of Mechanicsburg, PA, passed away peacefully at Penn State Holy Spirit Hospital on November 16, 2020.
Born in Canada in 1932 in Ninette, Manitoba, he was the son of Gertrude and Hilbert Germain. He met the love of his life, Barbara Metcalfe, when they were both graduate students studying social work at the University of Manitoba in her hometown of Winnipeg. They married the following year in 1957. After moving to New York City in 1960, to finish his master's degree at Columbia University, they decided to stay and later had two beautiful boys to complete their family. It was in 1971 that they moved to Montclair, NJ and Garry went to work at the Department of Special Education in Livingston, NJ for 29 years. After helping so many families throughout his career, he retired in 2004. Garry and Barbara enjoyed their retirement by travelling the world. Already experienced travellers in Europe, they expanded their range to such places as Cuba, Peru, Morocco, China, Russia and India. After seven years of living in West Orange, NJ, they moved to Carlisle, PA to be closer to family in 2011. In Carlisle, Garry, Barbara and their two beloved dogs were "town fixtures" in the various parks and on Dickinson College's campus for their multiple daily walks. Garry was a lover of literature, art, the opera and the New York Times. Ever engaged with his friends and family, he always put the interests of others above his own and made sure they felt welcome and comfortable.
He was preceded in death by his parents, as well as his brother Hilbert and his sister Gail.
Garry is survived by his wife of 63 years, Barbara Germain of Mechanicsburg, PA; his oldest son - Paul Germain of Melrose, MA, as well as Paul's wife Fiona, his grandson Alexander and his granddaughter, Sabrina; as well as by his youngest son - Chris Germain of Carlisle, PA and his wife, Jennifer. He is also survived by his sister Norma, in Glenboro, Manitoba, and several nephews and nieces. He will be remembered for his genuine kindness to everyone he met, love of family, love of his two dogs, and most especially his gentle spirit and giving heart.