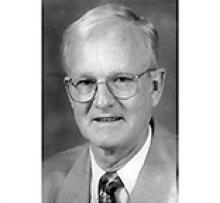 Glenn passed away peacefully at the Vancouver home of his daughter, surrounded by family.
Glenn is survived by his wife of nearly 60 years, Jean (Armstrong), as well as his children, Bill Swift (Cathy) and Catherine Andrews (Keith); his grandchildren, Megan, Emily (Adam) and Bridget Swift; and Diana Andrews; his brother Jim Swift (Alba); his sister-in-law Iris Armstrong (Keith); nieces, nephews and other extended family. He was predeceased by his parents, William and Mary Swift, as well as his sister Marilyn Maslyk and her husband Raymond.
Glenn was born in Athabasca, Alberta, and grew up in Edmonton. Most of his adult life was spent in Winnipeg before moving to British Columbia's Lower Mainland in 2013.
Glenn held a BSc (Gold Medalist in Electrical Engineering). He spent two years in Britain as an Athlone Fellow at Metropolitan Vickers in Manchester and London. Upon his return to Canada, Glenn spent two years with Canadian Westinghouse before returning to pursue MSc from the University of Alberta. He became a Professional Engineer in 1958 and joined the staff of the University of Manitoba in 1960. In the mid 1960s Glenn received his PhD from the Illinois Institute of Technology.
During his time at the University, he was selected as "best professor" five times by graduating classes and twice received Awards of Excellence for his teaching. He was always a strong advocate for increasing the number of female engineers, as well as for proficiency in technical writing. He retired from the University in 1996 as a Professor Emeritus.
Professionally, Glenn was renowned for his research and work with industry, presenting papers world-wide, and his activity with the IEEE. One of his crowning achievements lay in working with a graduate student and industry to take a research project and turn it into an industry standard for a transmission line protective relay system. He received a Merit Award from the Association of Professional Engineers of the Province of Manitoba," in recognition of his outstanding career as a scholar and educator".
Personally, Glenn was known for his kindness, wit and humour, as well as his love of language. His grandchildren especially remember his creativity in the workshop and being permitted to "help" him in his endeavours; they have many enduring examples of his work. He also had a lifelong love of music and was proud of his time with the Winnipeg Pops Orchestra, both as a performer (trumpet) and as President.
As per Glenn's wishes, cremation has taken place. Donations can be made to the charity of your choice.