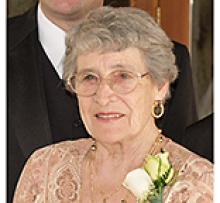 Doreen lost her battle with COPD and pneumonia on November 12, 2020, and peacefully passed away at the Grace Hospital with family by her side.
Doreen is survived by her husband Don, daughter Elizabeth Ann Peech (Bob), son Bill (Denise) and granddaughter Brooke. She is also survived by her sister Anita Matthews and brothers, Les (Thelma) Matheson and Lynn (Gloria) Matheson, as well as many nieces, nephews and cousins.
Doreen was born January 16, 1928 in Russell, MB. She was the first child of Annie and Franklin Matheson. She grew up on the family dairy farm and like most kids in the country quickly became involved in sports. Apparently Eaton's catalogues make great shin pads when playing hockey! She also got an early start at curling and became quite proficient.
Following high school, Doreen came to Winnipeg to go to "Normal School" (later called Teachers College). She then taught at a number of one room country schools in Southern Manitoba before earning a position at Linwood School in St. James where she taught grade 7 for 17 years. She later substitute taught for a number of years in the Ft. Garry School Division.
Doreen's proudest curling accomplishments were winning a car at the Charleswood "Little Car Bonspiel" twice. She played lead on Norm Houck's rink in 1960 and on Bob Goodwin's rink in 1965. Each team had to have at least one female player. It was at the 1965 bonspiel that she met her future husband Don who was playing third on the team. A whirlwind courtship ensued and they were married six months later.
Doreen was a member of Niakwa Country Club for a number of years and scored a hole in one on the par 3 fifth hole in 1964. Later she was a strong supporter of Elizabeth Ann and Bill in Niakwa's Junior Golf program.
Doreen was also an active volunteer. She was a Junior Chairman for the MLGA and a favourite memory was accompanying the Junior Girls team to the national championships in Prince Edward Island. She also spent many years on the executive at the Century Figure Skating Club.
Doreen and Don enjoyed travelling and visiting with relatives and friends in Scotland and Ireland, as well as their annual trip to British Columbia to celebrate Brooke's birthday. They also spent many warm winters in Titusville, Florida. Playalinda Beach was a favourite, and watching the NASA space shuttles go up and come back was often a highlight of her winter.
Doreen's wishes were for cremation and no service. A private family interment will take place at a later date.
Thank you to Dr. Karen Boyd and Dr. Elizabeth Whittaker for their years of care and support. Thank you to the many amazing home care staff who came to the house and looked after Doreen over the last few years. Thank you to the doctors, nurses and aides at the Victoria Hospital and St. Boniface Hospital for your continued care over the past few years, as well as a special thank you to the doctors, nurses and aides at the Grace Hospital for your care and compassion during Doreen's final few days. You made a tough time very calm and peaceful.
In lieu of flowers, please donate to a charity of your choice.