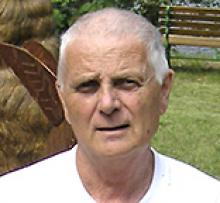 After a very short battle with cancer, Jim passed away at the age of 83.
Jim will be greatly missed by his high school sweetheart and devoted wife of 60 years, Audrey; loving daughter Sue; son-in-law Kris; grandchildren, Olivia and Sam; as well as family members and close friends.
Jim or Jimmy as he was known by many as a young boy, was born and raised in Winnipeg. He grew up alongside his father at the Polo Park Race Track and Assiniboia Downs, caring for their racehorses. He accompanied his father to races across Canada and to Lexington/Louisville, Kentucky to buy horses. During these times, he would ride in the boxcar with the horses. He was so often covered in hayseeds that his friends fondly nicknamed him Seeds because of it.
Jim graduated from Kelvin High School, then attended the University of North Dakota and obtained a Bachelor's Degree in Physical Education and a Masters in Administration. Jim was President of the Manitoba Parks and Recreation Association, Canadian Parks and Recreation Association and Public Leisure Council of Canada. He was instrumental in the Panda visit in 1989 and travelled to China to bring them to Winnipeg. Jim served on the 1999 Pan Am Games Bid Committee and attended the games in Indianapolis, where he met Mohammed Ali, a person he had always admired. Jim retired in 1992 as General Manager of Parks and Recreation for the City of Winnipeg. He dedicated his many years of service to the betterment of parks and recreation for the city's residents.
In retirement, Jim and Audrey continued to spend the summers at their cottage on Favel Lake north of Kenora. The families cottage was a special place to Jim, he loved to putter around fixing things and spending time fishing, water skiing and watching the loons on the lake. Jim was a sports lover right to the end, watching his beloved Pittsburgh Steelers last game against the Cowboys winning "by the skin of their teeth." Like most kids in Canada, he grew up playing and watching hockey. He was a huge Winnipeg Jets fan from the start and was a season ticket holder for many years. But golf was Jim's passion, buying his very first set of clubs when he was just nine years old. Jim became a very accomplished golfer and was overjoyed at getting not one, but two hole in ones in his life time.
Jim has been described as one of the good guys, compassionate, dignified and witty. He will not be forgotten, will always be loved and forever missed.
In his last days, Riverview Health Centre cared for him. We wish to thank the wonderful Doctors, Nurses and Health Aides.