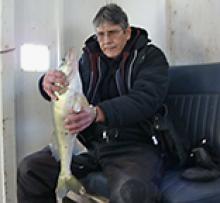 It is with heavy hearts we announce the passing of our brother Brent on November 18, 2020, after a long hard battle of many illnesses.
Brent was predeceased by his father Gerald and mother Mabel (nee Swain). He leaves his brothers, Randy (Donna) and Larry to mourn his untimely death. Brent will also be remembered by his many aunts, uncles, cousins, numerous friends and co-workers, as well as many close friends that held a special place in his heart.
Born in Selkirk and raised in Lockport, Brent was employed at St. Andrews Lock and Dam until an illness forced him into an early retirement. Brent loved the outdoors and sledding with the guys. He also had a passion for ice fishing with his brother Randy as well as many close friends.
The family would like to thank Selkirk Regional Health Centre and all the nurses and doctors for their care in Brent's final days.
As per Brent's wishes cremation has taken place. Due to Covid-19 restrictions, a private family burial will take place at a later date.