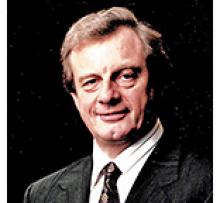 Peacefully, on November 12, 2020, David Alden Farlinger passed away at his home at the Convalescent Home of Winnipeg.
Dave was born in Winnipeg on October 22, 1938, the son of David Edwin and Eveline Farlinger (nee Partridge). Dave grew up in the family home on Scotia Street with his two sisters, Lois and Evie. He attended West Kildonan Collegiate, graduating in 1956, and graduated from the University of Manitoba Engineering program in 1961.
Dave married Roslyn Fenton in May of 1966. Together they raised their two children, Kristin and Scott, and loved each other for 42 years. Dave missed Roslyn dearly after her passing in 2009.
A civil engineer and an expert in his field, Dave enjoyed a wonderful career specializing in energy and regulatory consulting, which saw him grow a local engineering firm into a successful international group of companies, the I.D. Group. Later in life, Dave struck out again to form his own energy consulting firm, Energy Consultants International, along with friends and colleagues from the I.D. era. Throughout, he took on many roles in the engineering and public spheres, including the Chair of Teshmont Consultants Inc.; President of the Association of Consulting Engineers of Canada; member of the National Research Council of Canada; Founding Director of the Association of Consulting Engineers of Manitoba; and Chair of the Manitoba Water Commission reviewing the 1997 Flood of the Century, as well as many other distinguished positions.
Dave's career took him from the Canadian North to Antarctica, through Saudi Arabia, Russia, Mexico, and to other points around the globe. He was perhaps proudest to have been the "Ice Engineer" for a Hollywood production filmed on frozen Lake Winnipeg, with Roslyn gamely by his side, holding a survey rod.
Dave most enjoyed his time with Roslyn and their children at the family cottage, which he built at Clytie Bay, Ontario in the 1970s. He spent his later years with Roslyn and many great friends golfing at Niakwa Country Club, where he was very involved with the Board and its committees. In retirement, he spent many enjoyable vacations at the Tucson home that he and Roslyn had planned together.
Dave was blessed with wonderful friends in both Winnipeg and Tucson, who remember him as a kind, knowledgeable, and exceptional man. They will miss his sense of fun and the twinkle in his eye whenever a clever word was at hand.
He treasured his family, and family gatherings in particular - especially at Christmas. He enjoyed the special relationships with siblings, cousins, nieces, nephews and in-laws he had throughout the Dearden, Tanner, Partridge, Fenton, and Mitchell clans. He loved and was loved by Kristin and Scott, and was proud of their many accomplishments. He was adored by his grandchildren, who remember many fun visits with Grandpa.
Among immediate family, he is survived by daughter Kristin and son Scott (Virinder Gill); grandchildren, Ethan Anderson and Simran and Roop Farlinger; sister Evie Tanner (Dr. John Tanner); and brothers-in-law, Edward Dearden and Richard Fenton (Nancy). He was predeceased by wife Roslyn, his parents, and sister Lois Dearden.
He will be greatly missed and always with us in our hearts.
The family sends its thanks to Dr. Kevin Coates for many years of thoughtful care, and to the Convalescent Home of Winnipeg for their care and stories shared. A special thanks to Dr. John Tanner for his generous attention over the years, among the many family members and good friends who kept Dave in their thoughts.
A memorial service will be held when conditions allow.
In lieu of flowers, donations may be made in Dave's memory to the Alzheimer Society of Manitoba, 10 - 120 Donald Street, Winnipeg, MB R3C 4G2 or to the Partridge Family Scholarship Fund, with cheques payable to the Seven Oaks Educational Foundation, 830 Powers Street, Winnipeg, MB R2V 4E7.

The family invites friends to sign the online book of condolences at ejcoutu.ca