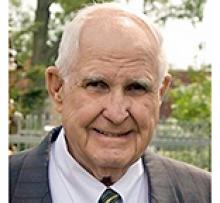 Just two weeks short of his 89th birthday, Dad entered the presence of his Lord.
Dad was born in Sperling, MB, the youngest of five children born to William and Margaret Wilson. David or "Buddy" as he was called by his family, moved to Winnipeg in 1938 with his parents. It was then that Dad began to attend Calvary Temple where he committed his life to Christ and became a lifelong member. There he also met and married Viola Salmonson on August 14, 1954. He spent 37 years working for Manitoba Telephone System until his retirement in 1989.
Dad's heart was for serving God which he did faithfully throughout his life. He did that by helping to build Calvary Temple Camp on Red Rock Lake where he served as Director for many years; leading young men in Christian Service Brigade #590 for 55 years; bringing children to Sunday School in his car or driving a Sunday School bus; serving for 20 years on the CT Board; playing in the CT Brass Band for 25 years and in so many other ways. Dad lived a life of steadfast faith in God trusting Him through life's challenges.
Dad was predeceased by his beloved wife Vi, his granddaughter, Bonnie Mitchell, his parents, and all his siblings, Stan, Anne, Alvin, and Edna Arnason.
Left to cherish his memory are his children, Grant (Janet), Gary (Sandra), and Joanne (Jim Poirier); his grandchildren, Angela, Mark (Tara), Carina (Ryan), Todd (Kelsey), David, Liana (Daniel), and Scott; three great-grandchildren Tasha, Connor and Brayden; as well as many nieces, nephews, family members and friends.
Visitation will take place by invitation only. A graveside service will be held on Monday, November 23, 2020 at 12:30 p.m. at Chapel Lawn Memorial Grounds, 4000 Portage Avenue. Due to provincial restrictions, guests will be required to remain in their vehicles for the duration of the interment.
In lieu of flowers, memorial donations may be made to Calvary Temple Children's Ministries.

Now we trust in God to keep us, 'Bright and Keen for Christ'
Because we love Him, because we want to serve Him, until we see Him face to face.