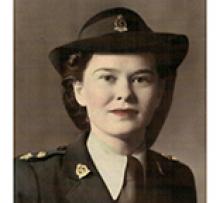 On Wednesday, November 18, 2020, at the Charleswood Personal Care Home, Enyd Forrest passed away gently in her sleep as she so deserved, at the age of 99 years.
Enyd was born February 5, 1921, and grew up on a farm near Chatham, Ontario, the second oldest in a family of five.
Lieutenant H. Enyd Forrest served as a nurse with the Royal Canadian Army Corps in an army hospital in Ottawa during the Second World War, which is where she met Ian Roderick Forrest. They married and have six children: Edward, Timothy, Patrick, Ian, Chloe, and Donald. She continued her nursing career in Winnipeg, and worked at the General and Misericordia Hospitals, but spent most her nursing career at Deer Lodge Hospital when it was operated by Veterans Affairs.
Enyd and Rod were active members in the Kinsmen and Kinettes organization for many years, and established many lifelong friendships.
Enyd leaves to cherish her memory her sons, Ed and wife Angela (nee Cholakis) and Don; son-in-law Joe Sample; youngest brother Charles Skipper (Beverley); grandchildren, Christopher, Jeffrey, Stephen, Jennifer, Enyd and Ross; and great-grandchildren, Eloise, Henry and Rose, with a fourth great-grandchild expected in March 2021.
Besides her husband, Enyd was predeceased by children, Ian, Chloe, Timothy and Patrick.
Cremation has taken place, and no public service will be held.
The family extends their thanks to Charleswood Personal Care Home for their kindness and care.