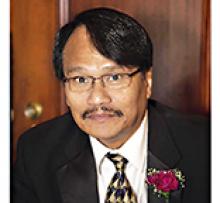 Peacefully on November 17, 2020, with his family by his side, Pablo "Lito" Taruc joined his Creator at the age of 62. Until his last breath, his heart throbbed with love and affection for his family and for his community.
Lito was born on June 29, 1958, in Gapan, Nueva Ecija, Philippines. He spent his younger years in the Philippines and moved to Winnipeg, Manitoba, Canada in 1979. With a desire to succeed, Lito quickly found gainful employment at Versatile Farm Equipment Company where he worked for almost two decades. It was during this time when Lito found his way into serving his fellow kababayan in Winnipeg.
It's hard not to think of Lito Taruc when the words 'Filipino' and 'community' come up in conversation. Lito lived a life dedicated to his family and to the service of others.
Lito's passion for the community was ignited when he started working at CKJS 810 AM in 1997, as the news director. As a trusted voice in the media, Lito had the opportunity to meet people and build relationships in the community, becoming an ambassador for the Filipino community in Manitoba. Lito held numerous leadership positions including: the President of Radyo 27 CB Club of Winnipeg; President of the Philippine Basketball Association of Manitoba; President of the Filipino-Canadian Disaster Relief Fund; Philippine Nayong Pilipino Pavilion Ambassador; President of the Philippine Heritage Week Coordinating Council; President of Gapan Association of Manitoba; President of the Philippine Canadian Centre of Manitoba (PCCM) and President of the Philippine Association of Manitoba Inc. (PAM).
Lito's gift was his ability to communicate and to connect with people. In his line of work, he had the opportunity to interview many notable people and politicians in the Philippines and in Canada. A few memorable events in his career were the opportunity to interview Past President of the Philippines Gloria Macapagal Arroyo and The Right Honourable Justin Trudeau, Prime Minister of Canada. In 2012, Lito was awarded the Queen Elizabeth II's Diamond Jubilee Medal, a recognition given to individuals for outstanding and exemplary contributions to their communities and to Canada as a whole.
Lito loved celebrations and in his most recent role as Marriage Commissioner and Commissioner of Oaths, he had the privilege of officiating marriages and helping couples enter the sacredness of matrimony. As a man of wisdom and compassion, Lito had become Ninong (godfather) to provide guidance to many married couples and children through baptism.
Lito's desire to help others was as limitless as his talent for cooking. He had the palate for great Filipino food and was famous for his barbecue birthday parties that drew friends and family in multitudes to their backyard at home. Lito's home cooked meals and traditional dishes were staples at his home, ready to be packed and given to anyone who had an empty stomach.
Lito will be remembered as selfless, generous, a great cook, a devoted volunteer, and a community leader. Above all, he was a loving husband, a caring father and a doting Opa/Lolo to his grandchildren who he loved so much. His warm smile, contagious laugh, and jovial character will be painfully missed by many. Lito leaves behind a legacy of selflessness and serving others before himself.
He was predeceased by: his parents, José Taruc Sr. in 1983 and Rebecca Malgapo Taruc in 1988; parents-in-law, Judge Flaviano Agpalza Sr. in 1982 and Jovita Agpalza in 2010; his siblings: Alberto Taruc; Teresa Taruc; Mario Taruc; José (Joe) Taruc Jr.; Tony Taruc; Horazio Taruc and Olive Taruc; in-laws: Laura and Allan Ledger; Fe Ebora; Bernadette Agpalza and Fermina Tolentino.
He will be lovingly remembered by his wife Hester Taruc. He will be dearly missed by his children: Rebecca Joy (Oliver), Joseph Paul (Daniela), Jake Matthew and Jovy May. He will forever be Opa and Lolo to his numerous grandchildren: Isabella Marie, Ryan Joshua, Elijah Samuel, Nathaniel Elliot, and Elizabeth Ava. He is survived by his siblings: Resty (Rose) Taruc of Toronto, Ontario, Canada and his sisters: Cristina and Chona (Arnel) Tecson of Gapan Nueva Ecija, Philippines; his in-laws: Annie Agpalza; Napoleon Ebora; Flaviano Jr. Agpalza; Ezra (Sita) Agpalza; Alicia (Robert) Pogson; Allen (Alicia) Agpalza and Janet (Gabriel) Sangalang of Orlando, Florida, USA. Lito will be fondly remembered by his numerous nephews and nieces in the Philippines, Australia, London, Canada and in the United States who he loved dearly. He will be sadly missed by relatives and many friends from around the world, especially the Filipino community in Winnipeg, Manitoba, Canada.
Funeral arrangements: Due to the current COVID-19 gathering restrictions, in-person attendance at the viewing and burial locations will be a private viewing.
Viewing (Lamay) will be held on Friday, November 27 and Saturday, November 28 and a livestream of the service will be posted in the Facebook group named Pablo "Lito" Taruc - In Loving Memory from 1:00 p.m. to 12:00 a.m. Burial (Libing) will be held on Monday, November 30 and a livestream of the event will be posted in the same Facebook group starting at 9:00 a.m. and the interment will start at 10:00 a.m.
The Taruc family would like to extend their heartfelt thanks to the staff at Grace Hospital and St. Boniface Hospital, and to all the friends and family who offered their support and prayers. A special thanks to Pastor Bruce Martin of Calvary Temple.