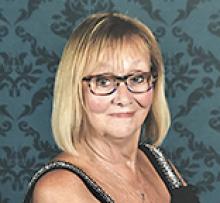 Peacefully, after a brief and courageous battle with cancer, Diane passed away at the Health Sciences Centre.
Diane is survived by her son Steven and daughter, Heather, and her grandchildren, Jada, Tiegan, Jessica and Abigail. Keeping Diane close to their hearts are her brothers, Brian (Marj) and Barry (Darlene); her brothers-in-law, Bob (Ruby), Mike (Sharon), Rick and Phil (Martha); as well as many nieces and nephews.
Diane was predeceased by her husband of 49 years, Earl, as well as, her parents, Stephen and Shirley Bugara and grandson Matthew.
Diane was born in Saskatoon, SK and moved around with her family until they settled in Swan River, MB. Upon her high school graduation, Diane moved to Winnipeg to further her education. It was at this time she met and married Earl on April 25, 1970 and they begin their journey together. Diane spent most of her life working at the University of Manitoba at the Centre for Higher Education Research and Development and the Registrar's Office, where she made many friends along the way. Diane was passionate about volunteering with Folklorama and at the Bomber Stadium. She enjoyed her time with both of these organizations and again, made many friends along the way. Diane was also passionate about travelling, she and Earl travelled far and wide to several different countries throughout their years together, making friends and memories along the way. After Earl passed, Diane found ways to continue travelling with close family and friends.
Diane was a social butterfly and loved to entertain. She was known for bringing her neighbours, family and friends together, hosting parties and making delicious food. Following her retirement from the Registrar's Office, Diane continued to meet up with her co-workers on Fridays for a drink and their hub chats.
All of our hearts are broken, just as Earl left us to soon, so has Diane. We find comfort in knowing they are together again dancing to their special song "Till".
Thank you to the hospital staff that cared for Diane during her time there.
Funeral services will be held at a later date when it is safe for us all to gather.