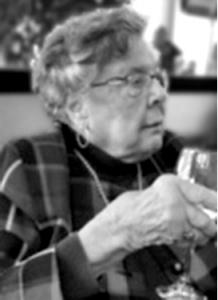 COLEMAN: Betty Jean Coleman of Victoria, British Columbia, formerly a long-time resident of Brandon, Manitoba, passed away peacefully on Tuesday, November 24, 2020 surrounded by family. Betty was born on April 15, 1925 in Brandon to Gilbert and Gladys Wankling. She is survived by: her brother Jim Wankling (Erla), her daughter Susan Romphf (Jack) and their children: Joslin Romphf-Dennis (James), Ward Romphf (Jessica), Jonathon Romphf (Cindy), Matthew Romphf (Juli); her son Bob Coleman (Julie) and their children: Stephen Coleman (Cori), Joanna Mulligan (Charlie), Elizabeth Pelphrey (Kyle); as well as her great- grandchildren: Noah, Chloe, Ethan, Maxwell, Ean, Elayna, Jackson, and Zelda. She was predeceased by her husband John Joslin Coleman; her brothers Bob Wankling (Val) and Jack Wankling (Wilma). Upon leaving high school, Betty went into nurses training at the Winnipeg General Hospital graduating in 1946. She worked in Brandon and Nelson, British Columbia. In 1949 she married the love of her life, Jack Coleman, a WW II veteran. They developed a close relationship with the 26th field regiment and the cadet corp.; which Jack was instrumental in founding. Upon Jack's death in 1987, Betty continued close ties with the regiment, being appointed both honorary Lieutenant Colonel and Honorary Colonel. She also was the sponsor of the HMCS Brandon, a role she enjoyed for many years. Betty was an active member of her community in Brandon, as well as active member in her church, St. Matthew's Cathedral. She belonged to many organizations within the church community. In addition, Betty was a member of Girl Guide movement both as leader and commissioner. She was involved with the Brandon 4H Horse Club serving as a leader. A special thanks to Joan and Denise, her private caregivers, who were with her the last two years. Due to the current pandemic situation, the service will be delayed until we can travel again. Should you wish donations can be made to St. Matthew's Cathedral Endowment Fund, 403 13th Street, Brandon, MB, R7A 4P9 or to the Royal Canadian Artillery Museum Shilo, The RCA Museum, P.O. Box 5000, Station Main, Shilo, MB, R0K 2A0; or to the Commonwealth Air Training Museum, P.O. Box 3, Group 520, RR#5, Brandon, MB, R7A 5Y5; all of which were special to Betty.