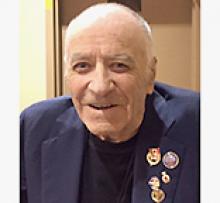 Norbert passed away peacefully at Actionmarguerite, St. Vital, on his 99th birthday with staff by his side.
Dad was born at St. Leon, MB., the youngest of 10 children. His family moved around in the dirty 30s to escape drought before finally settling in Fairholme, SK. He left the family farm in 1941, to enlist with the Canadian Armed Forces. In 1942, he received a medical discharge and then settled in Winnipeg. He took a machinist course with the Department of Veterans Affairs and went on to become an exceptional tool and die maker. He was a hard worker often putting in 60 hours/week. Dad married our mom, Hazel Louise Stubner (deceased) in 1946. He built their home and together they raised seven children, Dianne Moore (Dave), Lucille Whittaker (Mike), Paul Cote (Debbie), Ray Cote, Elaine Johnson (Doug), Robert Cote and Glen Cote.
Dad had a lot of pride and dignity. He loved to be around people and also loved to sing and dance. Many a time we listened to "Yellow Bird"! Two of his favorite places to be were The Legion and Wendigo Resort at Lac du Bonnet. Dad remained as sharp as a tack right up to his time of passing and remained very happy despite his mobility challenges.
He had experienced so much in his 99 years that it is almost impossible to imagine. The beginnings of household electricity and plumbing, residential phones, the development of radio and television (Archie Bunker), commercial air travel, space flight, computers and cell phones.
Dad had the love of his children but also 16 grandchildren and 20 great-grandchildren. He made many friends at The Cathedral Manor, St. Boniface before residing at Actionmarguerite until his passing. We are very thankful to all the staff at both Cathedral Manor and Actionmarguerite for all the care and compassion that he received, making his final years as enjoyable as they were. A special thanks to the staff that tended to him on his day of passing.
Peace be with you Dad, forever in our hearts, we love you and are blessed with the memories.