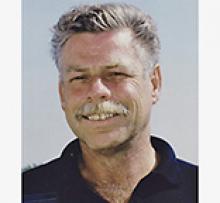 Gary passed away peacefully at St. Norbert Personal Care Home, following a brief illness.
He was predeceased by his parents, Les and Kae; and his wife, Joan (nee Routly). Gary will be missed by his children, Jill (Chad) and Mark; grandchildren, Peyton, Emery, Lyndon; and extended family and friends.
Gary was an adored and cherished only child, and a dutiful son. He grew up a passionate athlete, playing hockey, baseball, golf and curling. Just as his parents, Gary was a member of Rossmere Golf and Country Club for most of his life, both golfing and curling competitively. As a teenager, he also learned to become a skilled pool player, and an excellent card player.
In his grade 12 year at River East Collegiate, Gary met Joan and they began dating. Although Joan lived in Bird's Hill and Gary didn't have a car, he hitchhiked out to see her, even in the dead of winter. Gary and Joan married on October 24, 1970, and eventually bought a house near to his parents, and the golf course, where they raised their family.
In 1969, Gary received a diploma in Civil Technology from the Manitoba Institute of Technology, and later through evening classes received a certificate in Computer Analyst Programming from Red River College. He spent his career at the Canadian Wheat Board as a computer programmer. Gary sadly developed early onset dementia when he was in his early 50s. He gleefully retired at age 53, and immediately joined Transcona Golf Club where he golfed every day that the course was open.
Gary didn't just like to golf, he was actually pretty good at it, winning several amateur tournaments. He was exceptionally modest when people would learn that he had a career high of eight holes-in-one. He also got the rare curling bragging rights of skipping an 8 ender in 1983, in addition to winning many tournaments.
When Gary had something to say he said it, and when he had nothing to say he kept quiet. He enjoyed a good laugh and an animated discussion on a wide range of topics. He loved singing to the "oldies", once a couple beers loosened him up, and the fact that he couldn't hold a tune didn't stop him. Gary was a devoted husband and father, building a skating rink in the backyard every winter, driving Mark to sports, and having infinite patience in trying to teach Jill math (something at which he excelled). Gary was a hard worker and a handyman, able to build or fix pretty much anything. He built two family cottages at West Hawk Lake, and enjoyed spending every summer there. Gary loved animals and always owned a dog. In his retirement, he volunteered at the Humane Society as a dog walker.
The last 10 years of Gary's life was spent at St. Norbert Personal Care Home, where he enjoyed participating in every single activity offered there. He spoke fondly of his "second home" and the wonderful people there, friends he made, and the great food. Enough cannot be said for the quality of care that he received there. Our deepest thanks go to the dedicated staff at St. Norbert Personal Care Home. We are so grateful for the care provided to him and particularly, the compassion shown to him and us in his last days.
In lieu of flowers, a donation may be made to the charity of your choice.
Gary wasn't much of a story-teller himself, but there are many stories to be told about him, so given that we cannot gather at this time, everyone is encouraged to leave condolences or a story at ejcoutu.ca
A service will be held virtually on Wednesday, December 2, 2020, at 11:00 a.m. Join the livestream by logging on to E.J. Coutu Funeral Home Facebook page and join the livestream video.