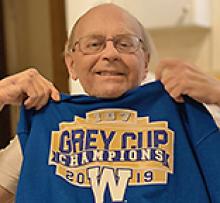 It is with heavy hearts that we announce the passing of our father, Donald Poetker on November 22, 2020, at Deer Lodge Centre.
Left to cherish his memory are his daughters, Ashley (Scott), and Crystal (Ryan); granddaughters, Savannah and Mylie; brothers, Rudy (Allison), and Dennis (Lillian); nephews, Mark, Brian, Jon and Kevin; nieces, Jocelyn and Amy. Don was predeceased by his father Bill, mother Betty, and brother Robert.
After graduating from River East Collegiate in 1966, Don continued his education at Red River College and obtained his Business Administration diploma in 1972. He then went on to obtain his CMA certification in 1978 to start his career in accounting. While Don held many positions in the accounting industry, he settled into a long career with Canada Revenue Agency as a GST auditor. After 17 years of dedicated service, Don retired from CRA in 2008.
As Don's family was deeply rooted in East Kildonan, it was only fitting that Don place his own roots there too. His home was his castle with his bountiful backyard garden being his pride and joy. His natural green thumb filled his yard with roses as beautiful as can be, tomato plants that grew as tall as six feet some years and an abundant amount of cucumbers, just to name a few.
Although Don was a man of few words, it was evident that he had two loves in his life -the Winnipeg Blue Bombers and his family. The moments we shared as a family around the kitchen table are memories that we will hold close to our hearts for a lifetime.
Due to COVID restrictions, a private graveside burial service will be held at 1:00 p.m., Monday, November 30 at Brookside Cemetery. Friends and relatives are invited to view his service via Facebook live on Klassen Funeral Home's page.
A special thank you to the staff from 4E, at Deer Lodge Centre. You made his final weeks as comfortable as possible in such a challenging time. Your endless patience and kind hearts in his final days will not be forgotten.
In lieu of flowers, donations can be made in Don's memory to Canadian Diabetes or the Alzheimers Society of Manitoba.

We love you Bud!