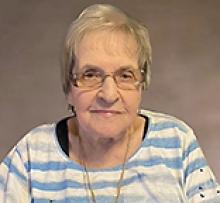 On November 24, 2020, a bright light went dark with the passing of Lena Parisien, our Baba, at the age of 100. Lena was a force to be reckoned with embodying strength and poise throughout her years, right until the end. Cool and composed on the outside, warm and compassionate on the inside; she was Judge Judy and RGB combined with her own personal spark that made her one of a kind.
Lena's composure and drive saw her through many ups and downs in her long life. Growing up in an era very different from today, she had little time for a childhood and had to be mature and responsible at an early age. She has two sisters and was predeceased by a brother and her beloved Ernest. She and Ernest met in 1942 and after only a week of knowing each other, they married and stayed together until his passing in 1983. They built a life and family together having four daughters and two sons, all of whom grew to have their own extended families. She stayed committed and true to her Ernest, never marrying again.
Baba lived independently until she was 97 years of age, ensuring every evening that her apartment was immaculate so should anything happen overnight, she could be proud of her home for anyone to see. Her greatest fear was losing her independence, but the day came when she could no longer stay alone, and she moved into the Simkin Centre. The entire team at the personal care home treated Baba with the utmost respect, particularly the staff on W2 to whom we are immensely grateful.
Once Lena settled in and became comfortable in her surroundings, she did not hold back sharing her spontaneous and unfiltered advice with those around her. She was direct, honest and usually right, which didn't always land well, but knowing the intention was good, you could not help but appreciate and love her for telling it the way it was. Her nature was also that of helping others and ensuring if she could, she would do so.
In September of this year Lena turned 100 and it was one of her happiest times. She was beaming with a smile from ear to ear sharing with everyone that the icing on the cake was the letter she received from the queen!
On November 12, the worst news came; Lena tested positive with COVID-19 and had to be placed in an insolation unit where she would fight the toughest battle of her long life. Sadly, it was too much and on November 24, Baba could fight no more and it was time to join her Ernest.
Lena had a strength of spirit that will live on in those who knew and loved her. She lived her life moving forward, never going back and learning along the way from every experience. This is the wisdom she leaves for all of us; live life to the fullest with honesty and integrity. No words can express how much you'll be missed Baba.
As requested by Lena, cremation has taken place and no service will be held.