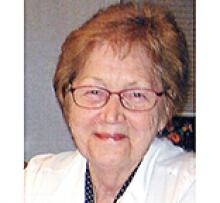 Rosemarie Yeo passed away at the Stonewall Hospital on November 25, 2020 with husband, Dale, at her bedside. A new angel is now in Heaven.
Rosemarie was born on March 16, 1941 in tiny Spring Valley, SK, but moved in 1950 to their new farm outside Dauphin, MB.
Having begun school in one-room schoolhouses, she found grades 9-12 at the Dauphin Collegiate quite different.
In 1959 she went to Winnipeg to commence nursing training, but one year later her plans begun to change. She met a fellow named Dale on a blind date at the Red River Ex. They hit it off and were married a year later.
A year after that, they moved to Roblin, MB to start Dale's high school teaching career. Little did they know that their arrival there in 1962 would signal the start of a 55 year residence there.
Roblin grew into a community that both loved dearly. Over the years, both gave much to Roblin because Roblin had done much for them.
Rosemarie's family expanded to four sons and finally a daughter by 1970. No children were ever loved more dearly. Rosemarie was "born to be a mother", it seemed, though she always credited her experience from being the oldest girl in her own Thiele family of five boys and five girls.
Always a pillar of her church, Rosemarie began seeking out ways to serve her community otherwise. She worked with the new nursery school as director for 21 years, helped and led the Food Bank, and joined the Roblin District Hospital Auxiliary. A pet project was her leading the effort to create a palliative care room in Roblin's Hospital. She succeeded.
The community acknowledged all this: in 1993, she was named Roblin's "Citizen of the year" by the Chamber of Commerce; in 2004, she was awarded the Parkland Regional Health Authority's "volunteer of the year" citation for the West District; in 2015, the Roblin District Hospital Auxiliary honoured her for 20 years as member, several years as secretary.
In 2004 Rosemarie suffered a major health setback when her kidneys failed. After two years on home dialysis, a wonderful friend donated a kidney to her to restore life to her and to Dale. In 2017, Rosemarie and Dale made the very difficult decision to leave Roblin. Needing to be close to family and the Health Sciences Centre, they moved to Stonewall and a new home at Lions Manor there. It proved to be a wonderfully warm and welcoming place, particularly helpful as Rosemarie's health declined.
Rosemarie was predeceased by her parents, Otillia and Frank Thiele of Dauphin, MB.; and by brother and sister-in-law, Larry and Roma Thiele, also of Dauphin.
Left to mourn her passing are Dale, her husband of 59.5 years; four Yeo sons: David (Laurel) of Stonewall, Douglas (Wei Li) of Ottawa, ON, Robert (Lindy) of Stonewall, Allen of Winkler, MB; and daughter Donna (Curtis) Yaschyshyn of Dauphin, MB.
Rosemarie loved her eight grandchildren with every fibre in her body. Devastated by her loss are Kelly (Spencer), Jamie, Scott and Jacynthe Yeo of Stonewall; Joshua and Jennifer Yaschyshyn of Dauphin, and little Elizabeth and William Yeo of Ottawa, ON.
The Thiele clan, so marvellous a family tie for both Rosemarie and Dale, will badly miss their sister: Thiele brothers, Leonard (Norma) of Dauphin, Richard (Gail) of White City, SK, Ronald ( Bonnie ) of Red Deer, AB, and Gerald (Glenda) of Dauphin; sisters, Gailene (Fraser) Webb of Sydney, Cape Breton Island, Julia (Bob) Coleman of Lexington, KY, Myrna (Lorne) Kopeechuk of Snow Lake, MB, and Sharon (Cliff) McArthur of Regina, SK.
Dale's only brother Clayton, wife Arlette, nephew Edmond and niece Amelia (Ben) and baby Cora over in London, England have been a bulwark of strength and support during these dark days, too. In such a small Yeo family, the loss of Rosemarie hits them particularly hard.
More than thirty nieces and nephews scattered across Canada, the U.S. and England have lost their beloved "Auntie Rosemarie". Many good friends in Roblin and elsewhere will feel a similar sense of loss. She was a loving friend and always there to help others in times of distress.
Thanks to everyone from near and afar for your help. Dale has gratefully declined flowers, food and sympathy cards. Keep him and the family in your mind and in your prayers instead.
Rosemarie has been cremated as she wished. A memorial service will take place next spring or whenever this cursed virus is vanquished.