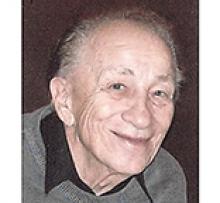 It is with profound sadness and aching hearts we announce the passing of Tony on Tuesday, November 24, 2020. Peacefully after a brief and courageous battle with cancer, Tony passed away at the Percy Moore Hospital.
He will be lovingly remembered by his wife Elsie; son Brad (Dana); daughter-in-law Candy; granddaughters, Natasha (Matt), Nikki (Brandon); grandson Clint; and two precious great-grandchildren, Bennett and Naomi Saunders; also his aunts, Evelyn Quesnel and Marcia Martinson; as well as several nieces and nephews. He was predeceased by his son Derek (January 23, 2020); his brothers, John and Ben; sister Josie; his father and mother, Teofil and Rozalie; his brothers-in-law, Walter Korbutiak, Ben Korbutiak, Clarence Quesnel, Darryl Martinson and Adolf Yanicki.
Tony was born in Zbaraz, Manitoba. He left home at age 15 to seek his fame and fortune. He held many jobs. He then returned to his home on the Zbaraz homestead, where he farmed for a number of years. He then took a course in barbering and began his career in barbering, but he still kept on farming. He always said he had three great loves - his family, barbering and farming in the order. He was well known for his sense of humour. As a barber he had a captive audience, where he rarely failed at coming back with a humorous reply as answer to almost any comment or inquiry to his client's question. He was a barber for 60 years, still cutting hair at age 91. Tony and Elsie went on many trips together - Hawaii (three times), Europe, Disneyland and Disney World, most of the United States, and nine provinces, except Newfoundland, which he was eagerly planning to visit next.

Through thick and thin
Through good times and bad
Through happy times and sad
We were a team
We held hands
Friends to the end.

Our family would like to thank Dr. Bruin and all of the staff at the palliative care unit at Percy E. Moore Hospital.
In lieu of flowers, donations can be made to the CancerCare Manitoba Foundation.
In honouring Tony's wishes, cremation has taken place and a Celebration of Life will be at a later date.