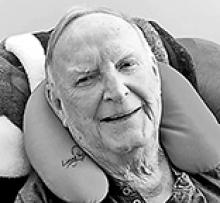 Mel passed away peacefully on November 25, 2020 at the age of 87 at Rosewood Lodge, Stonewall, MB.
He is survived by daughters, Deborah (Bob) Breton, Darlene (Wyman) Sangster, Pamela (Richard) Neyedly, and Linda (Mel) Smitzniuk; as well as many loving grandchildren, great and great-great-grandchildren.
Mel was predeceased by his wife Arvella (Gardiner); and siblings, Marnie, Wilfred, Eva, Mayzie, Vera, Gordon and Clarence.
Melvin was born in Garson, MB and grew up in Kimberly, BC. Being a talented hockey player, he played in the Western Hockey League. Mel was hired to work at Abitibi Pulp Mill, and played hockey for the Pine Falls Paper Kings, winning a Canadian Championship and later being inducted into the Manitoba Hall of Fame.
Mel spent many hours playing sports in Pine Falls, enjoying curling, baseball, tennis and golf. He followed his four daughters through many sporting activities. He retired to Stonewall in 1994. He was an integral part of the daily routine at the Kiln Drive Inn with his daughter Dar.
The family would like to thank the staff at Stonewall Hospital and Rosewood Lodge during his stay at these excellent facilities.
In lieu of flowers, donations can be made to the Manitoba Alzheimer's Society in memory of the love of his life, for 65 years, Arvella.
Due to Covid-19, a family memorial will be held at a later date.