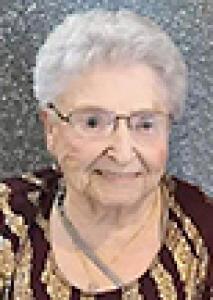 
It is with heavy hearts we announce the passing of our dear mother and grandmother Katarina Grienke (Schroeder), on Friday, November 27, 2020, due to Covid-19 complications.
She is survived by her six children: Marcia (Larry) Henzel, Calvin, Mavis Krentz, Terence (Tracey), Marla (Monty) Seper, and Meriena (Brian) Dowhy, 18 grandchildren, 21 great-grandchildren and two great-great-grandchildren. She also leaves behind one sister, Erna Fast, sister-in-law Helen Schroeder, sister-in-law Cheryl (Ron Andres), brother-in-law Norman Grienke and many nieces and nephews.
She is predeceased by her husband Edwin Grienke, December 11, 2006; parents, Gerhard Schroeder December 2, 1971, and Katarina Schroeder (nee Leoppky) October 20, 1940; her stepmother, Anna Schroeder (Friesen) January 30, 1985, and her brother George Schroeder January 9, 2009.
Mom grew up in New Bothwell and Randolph. She lost her mother when she was five years old and spent a lot of time at grandma and grandpa Schroeder's. In a while, this place became known as the Schroeder boys, and she considered it her home. As a young girl, Mom did not overly enjoy school. As soon as she was old enough, she started hoeing beets to make money and later worked at the St. Pierre sewing factory. She met our dad at a dance. After a courtship, they were married on June 13, 1953 at the St. Paul's Lutheran Church in Steinbach. Mom was also baptized at this time. They bought a dairy farm in Friedensfeld, where they made their living and raised six children. Mom had various jobs over the years, working at Johnny's Grill and spending years painting and staining homes with Lena Krentz. Mom also loved to cook and did lots of catering for the Friedensfeld Community Center and Magnolia restaurant.
Her family was the most important thing in her life. She would drop everything to do anything and everything for her children and grandchildren, and her cooking always brought us all home. She regularly hosted the entire clan for Sunday dinners on the farm, something her children continue to do with their families. Mom also became known as the queen of Napoleon cakes. People will still comment to us how much they love that cake; it was a gift she often gave to others. She was a wonderful mom and grandma, not just to us but to others as well. Her love of cooking and caring soul became well-known as everyone was always welcome in her home and anyone in need would get a care package and a helping hand, such an amazing example for all of us.
At 50, mom developed rheumatoid arthritis and had to give up painting. The disease took a toll on mom's body but she never complained and simply continued to adapt as the disease ravaged more of her body. Mom had an awesome disposition and never stayed angry for very long. Her glass was always half full, never half empty. She never complained and when asked, she always said she was doing fine and had a big smile on her face. She was the best mom and grandma and we will all miss her dearly; heaven gained an angel and so we are happy for her peace.
The family would like to thank all the staff at the Steinbach Bethesda Hospital for the wonderful care they gave our Mom. Even though they are overworked and often short-staffed, they were amazing. We are truly grateful from the bottom of our hearts.
The family invites you to join them for a virtual viewing on Friday, December 4, 2020 at 10:30 a.m. Please visit the Birchwood website for details.
A private graveside service will take place Friday, December 4, 2020 at the St. Paul Lutheran Cemetery, Hwy 12, Steinbach, MB.