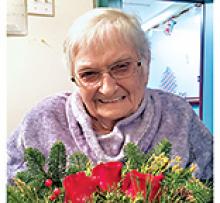 It is with great sadness that we announce the peaceful passing of Victoria Elizabeth Huewan (Palamarchuk), at the age of 94, at Red River Place on Sunday, November 29, 2020.
Vicky was predeceased by her husband Mike (1980); parents, Michael and Carrie (Pidstawka) Palamarchuk; siblings, Paul, Anne (Frank) Shynkarchuk, infant brother, Marion (Gary) Gelinas.
She is survived by her sons, "the boys", Henry (friend Jana) and Bruce (Linda), daughter Wendy (Zygmunt/Ziggy); grandchildren, Cyndi (Allan) Typliski, Kevin (Monik) Huewan and their mother Donna, Cara (Trevor Forkheim) Smolinski, Nicholas (Meagan) Smolinski, Ashley (Jason) and Courtney Huewan, Brandi Standing (Linda's niece); great-grandchildren, Holly Typliski, Abigail, Ella and Carter Smolinski, Evan and Max Forkheim; sister Ollie (Eddie) Pomarenski; numerous nieces, nephews, cousins, and a host of friends.
Vicky was born in October in 1926 in Silver, Manitoba and lived on a mixed farm with her family. Those early years held special memories especially of summers when a favourite aunt would visit from Nova Scotia, surprising Vicky and her siblings with toys or clothes. There were memories of bitter cold walks to Fyrer School and how grateful they were for the occasional ride on a fishermen's dog sled or a neighbour's horse that shortened their trek. Some memories were more life altering than others. When Vicky was 10 years old her mother developed TB and was sent to a sanatorium and then died. Vicky was pulled from school to care for her siblings, one being an infant brother that became ill and also died. These tragic diseases that destroyed a little girl's world, shaped the adult Vicky would become. She was always caring, compassionate, stoic, determined and routinely sacrificing to meet the needs of others. Following that dark time, when family dynamics changed, Vicky made a promise to herself that no one would ever go hungry in her house!
In August of 1946, Vicky married Michael (Mike) Huewan and they began their life on the farm west of Fraserwood. Those were happy days filled with everything that Vicky loved: the hard work and challenges of farming, raising and loving their three children, caring for the gargantuan garden and the building of lifelong relationships with nearby neighbours. In 1980, after two years of intensive home care provided by Vicky, Mike passed away from cancer. Thirty-four years of marriage and farming, side by side, had come to an end. For the next decade, Vicky continued to live on the farm by herself with support from family and neighbours. Then the very difficult decision was made to sell the family farm. Vicky moved to Selkirk to be near her children and grandchildren.
With her usual upbeat, positive attitude, Vicky adapted to city living and made friends with all she encountered over the years in Selkirk. She was many things to many people but to everyone she met, she was a kind, loving, generous, loyal, supportive and fun loving woman. She continued her passionate support of the Winnipeg Blue Bombers, the Jets and the NDP. (She voted in the last provincial election and was always ready to discuss politics.) She was always there whenever any family member needed extra help. Vicky, who was now just "Baba" to everyone in Selkirk and area, would pack her bag to go and help out. The more physical the labour, the more she loved it. She kept her optimist nature, despite having various health crises over the past decade. This eventually led to her being in a wheelchair and needing to live at Red River Place. As with everything else that happened in her life Vicky was accepting of this reality saying, "it is what it is" and "everything happens for a reason'. To say her family and friends will miss Baba is an understatement, but they know she is home now with her beloved Mike and the Lord.


"As for me, my life is already being poured away as a libation, and the time has come for me to depart. I have fought the good fight to the end; I have run the race to the finish; I have kept the faith; all there is to come for me now is the crown of uprightness"
2 Timothy 4: 6-8

May she rest in peace and may perpetual light shine upon her.
Due to Covid restrictions, a private Mass of Christian Burial will be celebrated at Notre Dame Church, Selkirk, MB at 11:00 a.m. presided by Father Gerald Langevin. Interment to follow in St. Francis Cemetery, Fraserwood, MB.
To view the Mass live or leave a condolence on her tribute wall go to www.gilbartfuneralhome.com and the link will be on her obituary.
Honorary Pallbearers are Bobby and Barry Hudyma, Peter, Kelly and Rocky Karish and Johnny Natyna.
In lieu of flowers, donations in her memory can be made to: St. Francis Cemetery, Fraserwood, MB ROC 1B0 or Harvest Manitoba to honour Vicky's wish that no one go hungry.
The family wishes to express their gratitude to the nurses and health care aides of Red River Place for the tender care provided to Vicky and her family this past week.