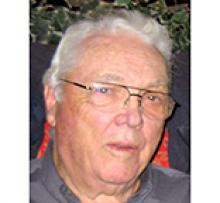 Peacefully at his residence on Thursday, November 26, 2020, Don passed away at age 94.
Don is lovingly remembered by his wife Dolores; son Andrew (Terri), their daughter Jennifer; son Arthur (Elianne), their children: Andrea, Aiyana, Thomas and Kaylan; daughter-in-law Sheila, her children: Daniel, Kailey; great-grandchild Zander; daughter Paula Zurbyk (Lyle), their son Justin; son Ashley, his children: Michael, Tyler and Devin.
Don was predeceased by his parents, William and Mildred and brother Earl.
Don was born in Lauder, MB. He attended school at Grand Bend and Lauder. In his youth, Don was an avid ball player and curler. He took his diploma course in Agriculture at the University of Manitoba and farmed with his father in Lauder. On December 3, 1960 he married Dolores Welk and they raised four children. This December would have been their 60th Wedding Anniversary. As a family they camped many summers and did trips in their motor home to British Columbia, the East Coast and Disneyland. Later on Don and Dolores enjoyed their country music and attended Detroit, Craven and Dauphin Country Fest. They also did two motor home trips to Alaska.
For many years starting in 1970, Don moved his family to Winnipeg for the winter seasons to pursue a career in ice making at the St. Vital Curling Club and back to Lauder for the rest of the year to farm. Eventually they moved to Winnipeg full time. Don also had his own business of selling nuts and bolts to farmers in the summer. In 1978, Don was one of the ice makers for the Winnipeg Silver Broom held at the old Winnipeg Arena along with the 1993 Scott Tournament of Hearts and the 1995 World's Curling in Brandon and other events. In 1991, at age 65 he retired from the St. Vital Curling Club and was made an Honorary Past President. Don joined the Khartum Provost Corps in 1981. He was their captain for close to 20 years participating in parades in the province for many years.
In retirement Don and Dolores spent their first few winters at a condo in Gulf Shores, Alabama followed by many more winters at Magic Valley Trailer Park in Weslaco, Texas where they met and made many friends from all over Canada and the U.S. Don enjoyed golfing down south and here at Oakwood Golf Course right up until last year. Farming was Don's passion and he frequently drove out to the Lauder farm to visit friends and family and to see how the crops were growing.
Due to Covid-19 restrictions, a private graveside service will be held in Lauder, MB.
In lieu of flowers, a donation can be made to Muscular Dystrophy or St. Vital Curling Club.