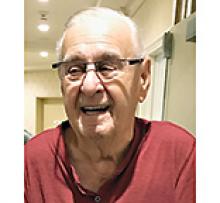 On November 27, 2020, Edward passed away at Seven Oaks Hospital, at the age of 88.
He spent his younger years residing in Windsor Park while he was employed as a Winnipeg Transit bus driver.
Upon retiring, Ed sold his house and moved to Fort Garry Place where he lived a happy, carefree life for the next 21 years. It was there that he met his special friend, Fleurette. Together, they travelled every winter, enjoying many adventures which included 16 cruises.
Ed's health began to fail so he moved to River Ridge Retirement Residence for the last year of his life. He was known by his neighbours and staff as a friendly jokester and was liked by all.
Besides Fleurette and her family, Ed will be missed by his sister Joan Rak, who was his caregiver for the past 15 months, as well as his brother-in-law Ed, nephew Tim, niece Tammy and their families.
Cremation has taken place. There will be no formal service.