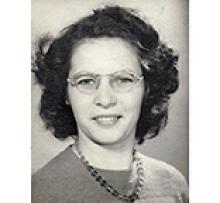 It is with great sadness and heavy hearts, that we announce the passing of our beloved mother, grandmother, sister and aunt Florence Jacqueline Richter (Townsend) at the age of 93 years, on December 1, 2020.
Florence (Jacie) is predeceased by her husband Charles (Charlie), her grandson Robert, her parents, John and Elsie Townsend and six siblings.
Jacie is remembered by her sons, Barry (Louise) and Ken (Candice); her five grandchildren, Lisa (Brian), Vanessa (Ben), Chantel (Darwin), Corwin and Nolan; four great-grandchildren; her two siblings, David and Gwen (Agnar) and her many nieces and nephews.
Jacie was born on March 25, 1927 in Nipawin, SK in a nursing home. Jacie grew up on the banks of the Saskatchewan River during the great depression where she lived on a vegetable farm with her parents and eight siblings. When Jacie was 13 years old her brothers, Red and Frank joined the Army. They both went to France where Frank was killed in action and Red returned home. In 1945 John and Elsie moved with their five younger children to Ashern, MB where they established a cattle farm. Jacie attended
Teacher's College in Winnipeg and moved back to Ashern where she met her husband Charlie in 1950. They wed in 1951 and lived on a farm by Dog Lake with their two sons, Barry and Ken. Jacie walked to Pioneer School where she taught, while Charlie ran the farm and took care of their two boys. Jacie and Charlie retired from farming in 1979 and built their new home on their land on Fire Road in 1980. They both loved gardening and took great pride in their yard which was always well kept. After 40 years of teaching in the Ashern area, Jacie retired in 1987. Jacie's hobbies included reading, puzzles, baking, fishing trips to the Fairford River, travelling (she travelled to every province in Canada) and spending time looking after her grandchildren.
Jacie was very involved in Ashern's community and was on various board committees. She will especially be remembered for her time dedicated to The Life Program. There are many people who remember Jacie as their teacher and anytime she would go out into the community everyone would want to stop and speak with her. Jacie was a tough lady. She was firm but fair and was known for her generosity and kind nature. Jacie was beloved by many and will be deeply missed not only by her family, but the community as well.
The family would like to express their gratitude for the care Jacie received from the staff at the Ashern Personal Care Home, Lakeshore General Hospital and Health Sciences Centre, Winnipeg.
In keeping with Jacie's wishes, cremation has taken place and a graveside service will be held at a later date.
Should friends or family desire, memorial contributions may be made to Living Independence for Elders, PO Box 165, Ashern, MB R0C 0E0.